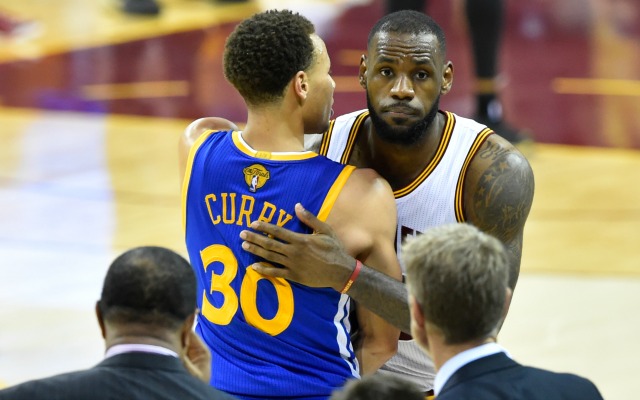 The Golden State Warriors have leaped out to a 2-0 lead in the NBA Championships and now will go out on the road and try to take the series in Cleveland. Golden State won Sunday Night’s game by the score 122-103, thanks in part to Stephen Curry and his NBA Finals Record nine 3-pointers. Curry ended the game with 33 points and was the leader in points for the Warriors. Kevin Durant came close to posting a triple double in the playoffs with 26 points, 9 rebounds and 7 assists in the game.

The game in general wasn’t as much of a blowout as it may appear on paper. At the end of the first quarter, the Warriors only held a 4 point lead of 32-28. That was before the onslaught of three pointers came from Steph Curry. Curry went off on a shooting spree and put on a clinic in front of the Golden State crowd, chipping in half of his points in the fourth quarter. Curry frustrated the Cleveland defense and was left open to take the shot on several occasions without a Cavalier defender on him.

The Warriors outscored the Cavaliers 27-18 in the second quarter to take a 59-46 lead at halftime. The Cavaliers came out strong in the third quarter and outplayed the Warriors 34-31 but they simply couldn’t continue with the pace and couldn’t maintain the game flow in the 4th quarter, dropping the game 122-103. The Warriors pretty much held the lead from start to finish in the game.

LeBron James was once again the Cleveland Cavaliers main source of offense, scoring 29 points, 9 rebounds and 13 assists. That was a big step back from game 1’s 51 point display put on by LeBron but the fact remains that without other guys stepping up against the offensive powerhouse of the Golden State Warriors, the Cavaliers will have minimal chances of winning a game in the finals.

Kevin Love had a decent game and posted a double double in game 2. Love had 22 points and 10 rebounds as the Cavaliers second leading scorer. The main issue with the Cavaliers really isn’t about scoring, the issue is their lack of defense. It was abundantly obvious that they simply can’t stop the Warriors defensively with their current gameplan.

Tristan Thompson was asked in the post game press conference if he felt “helpless” and abruptly ended the interview, walking off in what appeared to be anger and denial. Thompson stated that he didn’t think he was helpless against anyone and simply walked away from reporters.

Cleveland must find a way to slow down the Warriors in Game 3 and Game 4 if they want any chance of taking this series back to Golden State. The series will now move from Golden State to Cleveland for Game 3 on Wednesday Night. Tip off for the game is expected around 9:00 PM and can be seen on ABC. Oddsmakers have posted a early line on the game and have made the Golden State Warriors 4.5 point favorites in the game.

Cleveland Cavaliers On Brink Of Losing NBA Finals »
SportingPedia covers the latest news and predictions in the sports industry. Here you can also find extensive guides for betting on Soccer, NFL, NBA, NHL, Tennis, Horses as well as reviews of the most trusted betting sites.
NBA Betting Tips, Predictions and Odds 427