Michael Wacha Pitches A Near No-Hitter For St. Louis Cardinals 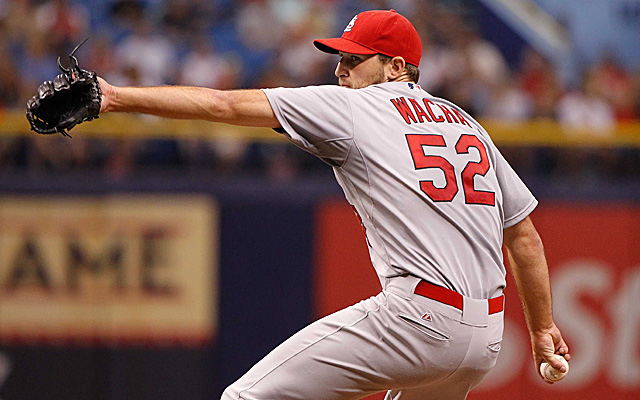 For the second time in his career, St. Louis Cardinals Pitcher Michael Wacha came very close to pitching a no hitter. On Sunday, Wacha went 9 innings without giving up a hit until he surrendered a hit to pinch hitter Colin Moran in the ninth inning. Moran has a 0-2 count on him and hit a single as the first hitter in the 9th inning.

Wacha only allowed 3 base runners throughout the game, 2 of which came in the fifth inning from walks and the single by Moran. Wacha retired the first 13 hitters in the game and looked very dominant in the performance. Wacha lasted 111 pitches in the game before being removed in favor of reliever Jordan Hicks. Hicks came in and got the final three outs in the game to wrap up the 9th inning and get the 5-0 win over the Pittsburgh Pirates.

In his last start, against the Milwaukee Brewers on May 29, Wacha went 6.2 innings and only allowed 2 hits in the game. Wacha is 7-1 on the year with a 2.41 ERA. Wacha has been very effective this year with forcing hitters into hitting ground balls and keeping the ball down. Over 12 starts, he has only allowed 4 home runs and his control factor has been superb, striking out 53 batters while walking 25.

Back during his rookie season, Wacha came very close to pitching a no-hitter but that bid was disrupted by Ryan Zimmerman with two outs in the ninth inning. That no-hitter attempt came on September 24, 2013 against the Washington Nationals. This was the second time Wacha went into the ninth inning without giving up a hit in his short tenured career.

Wacha was making an attempt to become the first St. Louis Cardinal to throw a no-hitter since Bud Smith did it in September 2001 against the San Diego Padres. He would have been the 10th Cardinals Pitcher in the history of the organization to throw a no-hitter. Wacha would narrowly miss throwing the 4th no-hitter of 2018.

Oakland Athletics Pitcher Sean Manaea threw the first no-hitter of the year, which was probably the most surprising as well because of who it was against. Manaea faced the league’s top offense in the Boston Red Sox, on April 21 and shut down the Red Sox in a 3-0 Oakland win.

Wacha has been one of the best pitchers on the Cardinals staff. Wacha raised his record to 7-1 on the year of a starting rotation that has been decimated by injury over the course of the year. They have had to reach out to their minor league organization and call up several of their younger pitchers and now Wacha has sort of became the makeshift ace of the club. He has one more win than Miles Mikolas and leads the team in strikeouts with 61.

The St. Louis Cardinals will now take Monday off, before opening up a 3 game series on FS1 with the Miami Marlins. The Cardinals have won 2 straight and 3 out of the last 4 and now host one of the worst teams in the National League.

Join us on Telegram to get even more free tips!
« With The #1 Pick In Monday’s MLB Draft, The Detroit Tigers Select...
New York Yankees May Boycott ESPN »
SportingPedia covers the latest news and predictions in the sports industry. Here you can also find extensive guides for betting on Soccer, NFL, NBA, NHL, Tennis, Horses as well as reviews of the most trusted betting sites.
MLB Betting Tips, Predictions and Odds 241