49’ers Legend Dwight Clark Passes Away After Battle With ALS 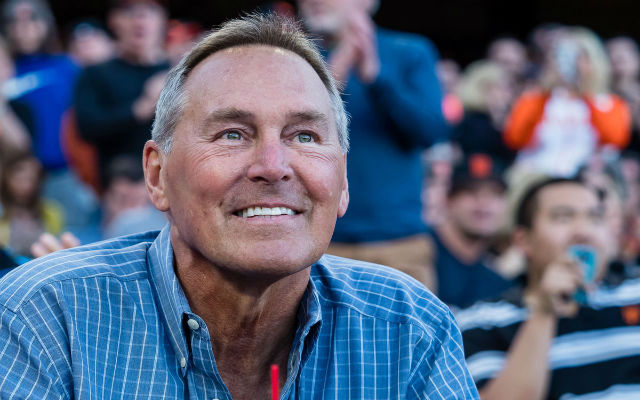 The man responsible for one of the most recognizable catches in NFL History passed away on Monday afternoon after a battle with ALS. Longtime San Francisco 49’ers Wide Receiver Dwight Clark passed away on Monday, surrounded by friends and family. Clark made it public that he was battling ALS just over a year ago and has helped open up the world to the tragic disease.

Clark was most known for “The Catch” which has become a landmark video replay and a play that will play on forever in the hearts of Niners fans around the world. Clark played his entire career in the Bay Area for the San Francisco 49’ers and from 1979 thru 1987, he was one of the most loved Niners by fans and teammates alike. Clark caught 506 passes for 6750 yards and 48 touchdowns during his time in the NFL. Clark also posted 48 receptions, 726 yards and three touchdowns in the NFL Playoffs.

Clark was 61 years old at the time of his death and resided with his wife Kelly, who went on Clark’s Twitter page on Monday to post the following:

“I’m heartbroken to tell you that today I lost my best friend and husband. He passed peacefully surrounded by many of the people he loved most. I am thankful for all of Dwight’s friends, teammates and 49’ers fans who have sent their love during his battle with ALS. Kelly Clark”.

Clark was drafted by the San Francisco 49’ers as a 10th round pick from Clemson in 1979 and was able to play his entire career with the Niners. Clark was part of the Dynasty created by Bill Walsh, with the assistance of Clark, Joe Montana, Jerry Rice and Roger Craig. Clark wasn’t a standout in college, but when the time came, he made an impression and that moment in time got him drafted.

Clark only caught 33 passes in his entire college career, but Bill Walsh needed a Wide Receiver to take some catches from Steve Fuller, a quarterback being considered for the Niners. Clark not only impressed Walsh enough to draft him in that one particular moment but he also worked his way onto the team, eventually earning a starting spot as the San Francisco 49’ers Wide Receiver. Ironically, he came into the NFL at the same time as Joe Montana, and the two become very close friends.

ALS or Amyotrophic Lateral Sclerosis is also more commonly referred to as Lou Gehrig’s Disease. It is unknown if playing football had anything to do with Clark being diagnosed with ALS. Clark stated last year in an interview that he was not sure if his ALS came from playing football, but wished that the NFL Players Association continues to push towards making the game of football safer for the modern-day players.

Many former teammates, NFL Coaches, current NFL Players and fans alike took to Twitter on Monday to express their sympathy to the Clark family. Former San Francisco 49’ers Owner Eddie DeBartolo stated that he was heartbroken and felt like he had just lost his little brother. DeBartolo stated that he considered Clark part of his extended family and one of his closest and best friends.

Join us on Telegram to get even more free tips!
« Chicago Bears Sign Zach Miller Following Gruesome Injury
Rob Gronkowski Back On The Football Field In New England »
SportingPedia covers the latest news and predictions in the sports industry. Here you can also find extensive guides for betting on Soccer, NFL, NBA, NHL, Tennis, Horses as well as reviews of the most trusted betting sites.
NFL Betting Tips, Predictions and Odds 332