Bryce Harper Not Helping His Cause By Wearing Vegas Hockey Jersey 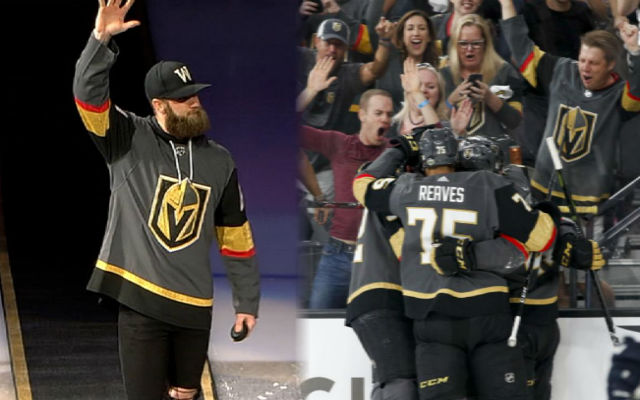 One of the biggest stories in the Major League Baseball Winter Meetings and offseason, will be the fact that Bryce Harper will be a free agent and shall potentially set the record book with the contract he signs. Harper is just 25 years old and will become a free agent at the end of the year. He is currently riding out the final year of a $35 million dollar, two year contract that he graciously agreed to, to remain in Washington back in 2017.

Many people in management firmly believe that Harper could sign a contract, upwards of $400 million dollars, which would far exceed the one that the Miami Marlins gave to Giancarlo Stanton of $325 million dollars. The question comes to mind, where will he sign?

Many believe that even though the “Evil Empire” or the New York Yankees, have Aaron Judge and Giancarlo Stanton, that they still may throw their hats in the ring as a player for Harper’s contract. Some believe that the Philadelphia Phillies may be the best suited to pick up and be able to afford the elite All-Stars contract. There are people that believe he will end up in a LA Dodgers uniform and some others think possibly the Chicago Cubs could be his next home.

Naturally, Washington Nationals are the favorite to resign Harper and if he plays his cards right, he should get the money to remain in the Nation’s Capital. This is the perfect storm for Harper as the All-Star game is in Washington DC this year and he will without a doubt make the team. This sets him up for the opportunity to further impress the fans and make them love him.

Harper posted the image with the following: “I’ll rock the red in Nats Park anytime, but at the rink I’m as gold as it gets! #VegasBorn” Harper received close to 150,000 likes on and more than 2,000 comments on the image. In the past year, no other image on Harper’s Instagram page has obtained anywhere close to the amount of engagement that this image has created.

Some comments were directed at Harper staying true to his hometown and others were scrutinizing him for wearing the opposing team’s jersey during such an important time, in the Stanley Cup finals. One thing is for certain, Harper’s management must have lost 3 years off their life when they saw this image posted as they will be negotiating with the Washington Nationals management in the coming months and having the fans of the cross town sports team on your side can only help your cause. Wearing their opponents jersey, being just one win away from capturing the first Stanley Cup for the Capitals, isn’t going to help your cause.

Join us on Telegram to get even more free tips!
« New York Yankees May Boycott ESPN
Max Scherzer of the Washington Nationals Throws Immaculate Inning »
SportingPedia covers the latest news and predictions in the sports industry. Here you can also find extensive guides for betting on Soccer, NFL, NBA, NHL, Tennis, Horses as well as reviews of the most trusted betting sites.
MLB Betting Tips, Predictions and Odds 241