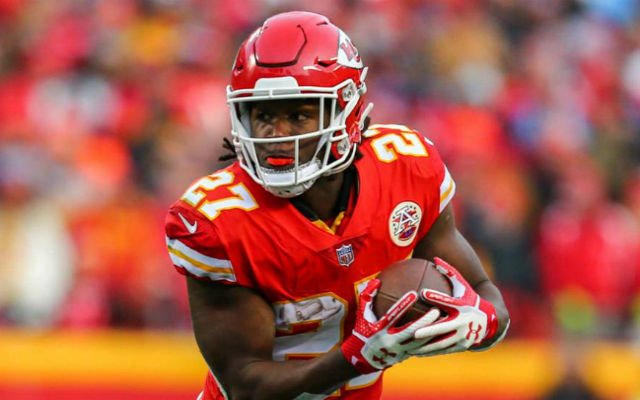 Information coming out of Ohio alleges that Kansas City Chiefs Running Back Kareem Hunt assaulted a man on Sunday morning after an altercation at an Ohio Resort. Hunt is accused of assaulting the man after a verbal confrontation turned physical on Sunday morning. Hunt was at the Bay Lodging Resort in Put-in Bay, Ohio when the alleged assault occurred. TMZ originally broke the story and released the information publicly.

The subject that was assaulted was not an acquaintance of Hunt; he was simply another guest at the resort. It has been discovered that Hunt was partying throughout the weekend at the resort. There are several photos circulating social media that show him at the resort’s various amenities enjoying the luxuries of the resort.

The subject that was assaulted was not injured badly but did state that he was assaulted by Hunt. The subject did not seek medical attention and was not treated for any injuries by medical personnel. The subject has stated that he does not wish to pursue legal charges against Hunt and just wanted to move on and forget the incident occurred. Hunt was not charged or arrested on scene and as of this publication, had not been formally charged with any crime.

This is not Hunt’s first run-in with accused of being violent. Back in February, hunt was accused of shoving a 19-year-old woman in a Cleveland, Ohio hotel. Hunt’s friends came to his rescue in this incident claiming that the 19-year woman made racial comments towards Hunt and shoved one of the female subjects Hunt was with that evening.

Hunt became an instant star last year for the Kansas City Chiefs, rushing for 1327 yards and catching an additional 455 yards, while also posting 11 touchdowns in his rookie season. Hunt was drafted by the Chiefs last year out of Toledo with the 86th pick overall. Hunt made the pro-bowl in his first year and was the NFL Leading Rusher last year with 1327 yards. Hunt finished second for the Offensive Rookie of the Year award, behind fellow Running Back Alvin Kamara, from the New Orleans Saints. The 22-year-old Running Back is originally from Elyria, Ohio, where this incident occurred.

Hunt will look to continue his success, this year under the first year starting QB Patrick Mahomes. The Chiefs will need Hunt in the game and not involved in any sort of legal proceedings as he will take a lot of pressure off of Mahomes in his first year under center.

Hunt can not be pleased with the way his offseason has gone, especially knowing how last year Dallas Cowboys Running Back Ezekiel Elliott was suspended for six games and caused a plethora of drama within the NFL after being caught up in something very similar to what Hunt is being accused of. The good part for Hunt is that this new incident does not appear to look like there will be charges filed however that may change as money hungry attorneys have a way of changing people’s minds when it comes to matters like this.

Join us on Telegram to get even more free tips!
« Rob Gronkowski Back On The Football Field In New England
Terrell Owens Declines Invite To His Own Hall Of Fame Ceremony »
SportingPedia covers the latest news and predictions in the sports industry. Here you can also find extensive guides for betting on Soccer, NFL, NBA, NHL, Tennis, Horses as well as reviews of the most trusted betting sites.
NFL Betting Tips, Predictions and Odds 332