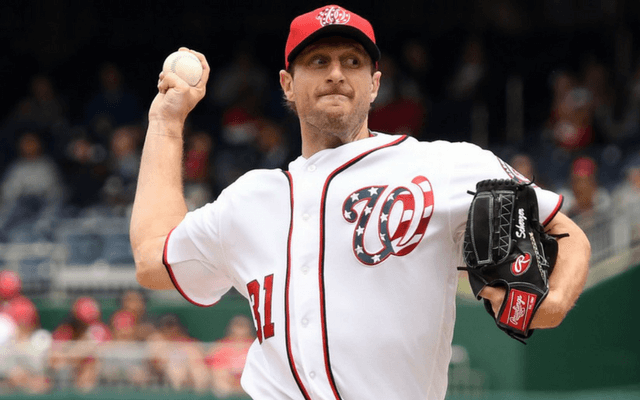 Scherzer has once again shown that he is the top dog in the majors, rushing out to become the first pitcher in baseball to post ten wins on the season. Scherzer has the most wins in baseball and now has a record of 10-1 on the 2018 MLB season. Not only is his win/loss record impressive but he has the third best ERA in baseball, posting a 1.95 ERA over the season. Additionally, we can’t forget to mention that Scherzer has struck out 133 batters this year, which is the best in the MLB and 17 more than the second best pitcher in the majors, Gerrit Cole, who has 116.

On Tuesday Night, Scherzer faced the American League Tampa Bay Rays. Scherzer went eight innings and allowed just five hits for two runs while striking out 13 batters and not walking a single hitter in the game. One of the most impressive stats coming out of this game is the fact that Scherzer threw 99 pitches and 81 of them were strikes.

Those numbers are impressive but what he did in the 6th inning on Tuesday Night. When a pitcher K’s all three batters in one inning on just nine pitches, it is referred to as an Immaculate Inning. Just to give you an idea just how impressive and how difficult that is to pull off, it has only been done 91 times in the history of the game. Making it even more impressive is the fact that it has only happened multiple times by the same pitcher by four pitchers, Lefty Grove, Sandy Koufax, Nolan Ryan and Randy Johnson.

Scherzer took the mound in the 6th inning and was completely dominant. He struck out Johnny Field, Christian Arroyo, and Daniel Robertson on just nine pitches, all of which were in the 6th inning. This was his second Immaculate Inning in his career and now joins the likes of the above mentioned Hall of Fame pitchers as one of only five pitchers to throw multiple immaculate innings. Last year, Scherzer struck out Philadelphia Phillies Cesar Hernandez, Odubel Herrera and Aaron Altherr on nine consecutive pitches, all strikes, to have a completely clean inning.

This was the second Immaculate Inning this season. An unlikely pitcher pulled off the feat earlier in the season as Baltimore Orioles Pitcher Kevin Gausman struck out the Cleveland Indians side of Yonder Alonso, Yan Gomes, and Bradley Zimmer on April 24, 2018.

The Nationals won the game 4-2 over the Rays, and Scherzer gained his 10th win of the year.

Join us on Telegram to get even more free tips!
« Bryce Harper Not Helping His Cause By Wearing Vegas Hockey Jersey
New York Mets Setting Records They Would Like To Forget »
SportingPedia covers the latest news and predictions in the sports industry. Here you can also find extensive guides for betting on Soccer, NFL, NBA, NHL, Tennis, Horses as well as reviews of the most trusted betting sites.
MLB Betting Tips, Predictions and Odds 241