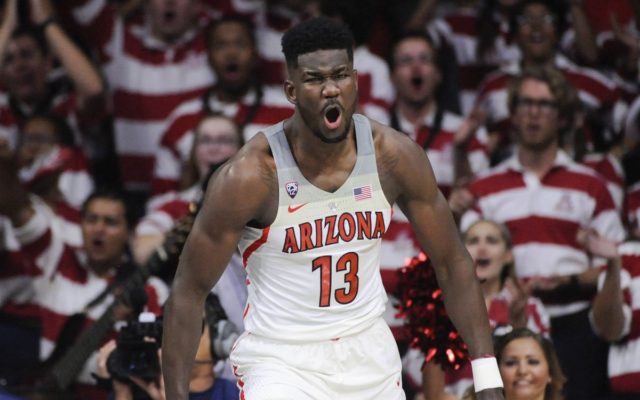 With the NBA Draft less than two weeks away, all of the experts around the world of media have begun issuing their mock drafts and big boards with anticipation of who will land in the first round. Normally, it is pretty safe to assume who will be the top five selections in the NBA Draft but this year, could sort of throw us a curveball. There pretty much is a consensus on who will be #1 but the #2-5 spots are really up in the air. Let’s take a look at where

Phoenix Suns | #1 Deandre Ayton (Arizona) – It is pretty much a done deal that Deandre Ayton will be the number one selection in the draft. The center out of Arizona is expected to go off the board first, as a freshman. The 7 foot “power center” will fill an immediate void that the Suns have lacked over the past few years. The Suns have routinely had one of the worst frontcourts in the NBA and Ayton will be used to fix that issue.

Sacramento Kings | #2 Marvin Bagley III (Duke) – We are going to put Marvin Bagley III in this spot but it wouldn’t surprise anyone to see Luka Doncic get picked up here but the Kings. Bagley is a freshman that can play either center or power forward, making him versatile for a team that can use a big man. The Kings already have De’Aaron Fox, Bogdan Bogdanovic and Buddy Hield so most people think they would much rather go with a big man that can play the 4 or 5 hole rather than pick up a pure scorer. Additionally, rumor has it that the Kings are not sold on Doncic and feel that Bagley has that “It” factor that can turn him into a star.

Atlanta Hawks | #3 Luka Doncic (Slovenia) – Many people had Doncic going #1 a month ago but the EuroLeague star should drop down to the 3 spot, possibly even further. That being said, I think it will be hard for the Atlanta Hawks to look away from the potential of Doncic. He is considered the most pro-ready player available in the 2018 draft. He is coming in as the MVP of the EuroLeague and will be the franchise player that the Hawks are dying to lock down. If the Hawks don’t pick up Doncic, they will go with Mo Bamba from Texas, which would leave Doncic to the Memphis Grizzlies. You can literally flip flop these picks but they will most likely fall in this order.

Memphis Grizzlies | #4 Mo Bamba (Texas) – With the 4th pick, the Grizzlies should take Mohamed Bamba. Bamba is an amazing shot blocker and is so young in his process that many believe he will grow into a monster of a player down the road. He is just a freshman, so he has plenty of time to progress. He has a 7 foot 10 inch wingspan and will be a physical presence in the paint.

Dallas Mavericks | #5 Jaren Jackson Jr (Michigan State) – Jaren Jackson is a three point shooting big man that can also play defense. That is exactly what they are use to in Dallas as they had Dirk Nowitzki for many years on the team draining threes and playing tough defense. Jackson is the youngest player in the draft at 18 years old and knowing that the shot blocking, three point shooting Forward/Center has time to develop will make him one of the highest prospects in the draft.

Orlando Magic | #6 Trae Young (Oklahoma) – Orlando is the perfect location for Trae Young. He will have steady defense around him and be one of their top shooters at the guard position. Young has proven that he can drain three points, very similar to Steph Curry. He really doesn’t have much defense but that isn’t necessarily a bad thing as we saw James Harden pretty much shoot the ball whenever it ended up in his hands and rarely play any defense on the court.

Chicago Bulls | #7 Wendell Carter (Duke) – Originally I had Mikal Bridges in this spot but swapped him out for Carter. Carter is younger and has a bit more of overall upside than Bridges. Carter is a big and powerful presence that plays very physical around the basket. That is what the Bulls need and should benefit from having Carter on roster.

Cleveland Cavaliers | #8 Michael Porter (Missouri) – Porter is basically a wildcard for any team to draft. He missed all but 53 minutes of his freshman year and is being viewed by many teams as #1 talent that simply fell because of injury in his freshman year. He is a pure shooter, which is what the Cavaliers will need with the anticipation of losing LeBron James.

New York Knicks | #9 Mikal Bridges (Villanova) – The Knicks need three point shooters and defensive minded players. Bridges will fill the gap in both areas for the Knicks and should be their first round selection.

Philadelphia 76’ers | #10 Lonnie Walker (Miami) – Pick up any article and start reading about Lonnie Walker and most people compare him to Utah Jazz Rookie of the Year candidate Donovan Mitchell. Walker can drain the three pointer and has a very nice skill set to make him successful in the NBA.

Join us on Telegram to get even more free tips!
« Golden State Warriors Early Favorites To Win 2018
Cleveland Cavaliers Will Shop Kevin Love If LeBron James Leaves »
SportingPedia covers the latest news and predictions in the sports industry. Here you can also find extensive guides for betting on Soccer, NFL, NBA, NHL, Tennis, Horses as well as reviews of the most trusted betting sites.
NBA Betting Tips, Predictions and Odds 1362