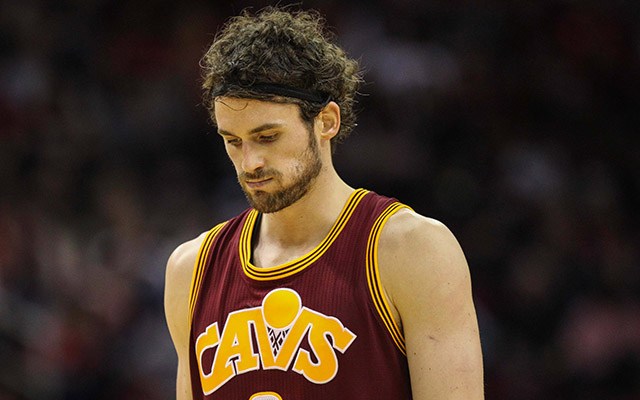 The world wide web has blown up over the past few days with speculation of what will happen if LeBron James leaves Cleveland in free agency over the summer. Many people feel that he will leave the Cavaliers because he wants to chase rings and needs a better supporting cast around him. From the reports coming out of Cleveland, it sounds like the Cavaliers could have a fire sale if LeBron James decides to part ways with his hometown team.

One of those players that could be on the market is Kevin Love. Love has played with the Cleveland Cavaliers since 2014, when he came over from the Minnesota Timberwolves. Love is a 44% career field goal shooter and sinks the three pointer 37% of the time. In 2018, Love only played in 59 games, as he was plagued with injuries ranging from his hand to a ligament injury in his thumb to dealing with concussions.

Love’s current contract sets to pay him $50 million dollars over the next two years but if LeBron James is not in Cleveland, than the expectations for success are greatly lowered and it is anticipated that the Cavaliers would look to part ways with the large contract owed to Love. Love would get paid $24 million dollars in 2019 and then have a player option for 2020 that would pay him and additional $26 million dollars. Love would be an easy target for other teams as he was the only other player in the NBA Playoffs on the Cleveland Cavaliers, other than LeBron James, that averaged double figures in scoring and rebounds during the playoffs.

Love averaged 14.9 points per game and 10.2 rebounds per game in the playoffs this year. Love went to the All-Star game this year for the second year in a row and his fifth over his career. Love could have easily posted more stats during the regular season had he played in more games. With his injuries plaguing him, he missed 23 games and played injured in a handful of others. Those injuries limited his performance and depleted his stat lines this year.

Love came to Cleveland just a few weeks after LeBron James signed to return to the Cleveland Cavaliers so these two have some history together. Love stated on Saturday that if it was left up to him, he would prefer to play with James for the rest of his career and stated that he has nothing but respect for the player that most consider to be one of the best NBA stars of all time.

The part of the equation that people are not looking deep enough into is the fact that the Cavaliers are over $150,000,000, leaving absolutely no room for them to sign additional players right now, as a way of sort of enticing James into staying in Cleveland.

LeBron James has not given any indication on where he wants to play and all though everyone has an opinion, the reality is James and his family are the only ones that really know his intentions and where he will end up playing basketball next year.

Join us on Telegram to get even more free tips!
« 2018 NBA Draft Mock Board Top 10
Detroit Pistons Find Next Head Coach »
SportingPedia covers the latest news and predictions in the sports industry. Here you can also find extensive guides for betting on Soccer, NFL, NBA, NHL, Tennis, Horses as well as reviews of the most trusted betting sites.
NBA Betting Tips, Predictions and Odds 1362