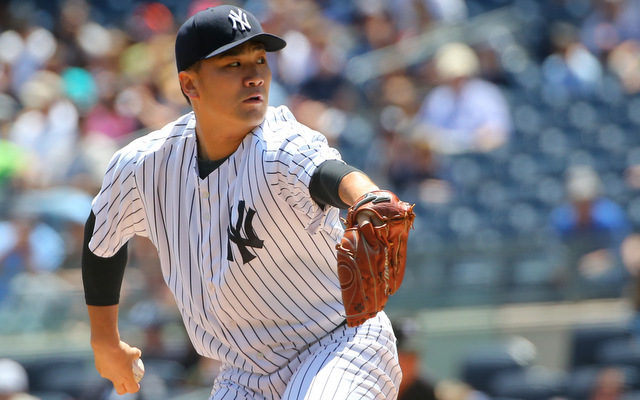 The injury bug has bitten the New York Yankees again and this time, it is with another starting pitcher. On Friday Night, Masahiro Tanaka was running the bases and came up stiff in both of his hamstrings. The Yankees took him out of the game, as what most thought was a precautionary measure but on Saturday, they placed Tanaka on the 10 day disabled list.

The 10 day disabled list tag is an initial measure but it appears that the New York Yankees management thinks this could be a more serious injury. General Manager Brian Cashman stated that he believed that Tanaka would be out at least a month. When New York Yankees Manager Aaron Boone was asked his thoughts on a timetable for Tanaka’s return, he stated that he believed that he could possibly be back prior to the All-Star break.

Tanaka is not the only pitcher that the Yankees are now without. On Thursday, Jordan Montgomery had Tommy John Surgery, which will sideline him until at least the second part of 2019 and possibly even as far as 2020. The surgery was performed to repair a torn ulnar collateral ligament in Montgomery’s left elbow, as well as remove a loose bone chip in the elbow.

Montgomery had been on the sidelines since May 1, when he left the game vs. the Houston Astros with tightness in his elbow. He was 2-0 on the season with a 3.62 ERA in 6 starts.

With Montgomery now out of the lineup for the remainder of the year and Tanaka down for at least what would appear to be a month, the Yankees are forced with either bringing up a pitcher from the farm system or trying to secure a pitcher in a trade. The Yankees have Justus Sheffield eagerly awaiting a chance to start for the big club down in Triple A. Sheffield pitched on Friday Night in Scranton/Wilkes-Barre, allowing 2 earned runs over 6 innings.

The Yankees had already been without pitcher Luis Cessa, who was dealing with a strained oblique muscle. Cessa did not appear to factor into the starting pitching rotation for the Yankees at the beginning of the year but with Tanaka and Montgomery both out, this would be the ideal spot for Cessa to make an impressive and fight for a spot in the rotation.

Cessa will make a rehab appearance in High-A Tampa sometime this upcoming week. He is expected to throw approximately 60 pitches during the rehab assignment. Cessa has not been named a starter in the rehab assignment but could make the start but will only be allowed to pitch a max of 60 pitches.

The other option would be for the Yankees to try and obtain a starting pitcher through a trade. Many eyes have been on Cole Hamels and beings the Texas Rangers are trying to part with the large contract of Hamels, this may be the perfect time for the Yankees to make a move and try to secure the longtime starter. Hamels would bring a sense of stability to the Yankee pitching staff.

Join us on Telegram to get even more free tips!
« MLB Trade Deadline Top Targets
Cleveland Pitcher Kluber 1st In AL To 10 Wins »
SportingPedia covers the latest news and predictions in the sports industry. Here you can also find extensive guides for betting on Soccer, NFL, NBA, NHL, Tennis, Horses as well as reviews of the most trusted betting sites.
MLB Betting Tips, Predictions and Odds 241