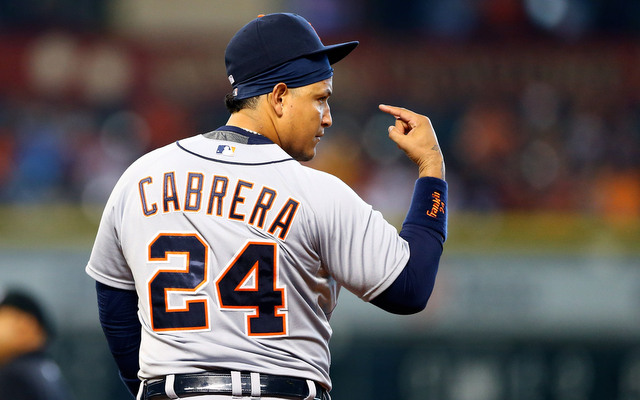 The MLB Regular Season has been full this year of various injuries that have plagued various teams and the Detroit Tigers are no different. The Tigers have also been tagged with several injuries this year, including their lone veteran that lasted through their fire sale, Miguel Cabrera. The Detroit Tigers announced on Tuesday Night that Cabrera, or “Miggy” as fans around Detroit call him, suffered a season ending ruptured tendon in his bicep in their Tuesday Night game with the Minnesota Twins.

The injury prone Cabrera has battled injuries this year and had numerous stints on the disabled list for the Tigers. Cabrera missed time earlier in the year for bicep spasms. Cabrera was playing the Baltimore Orioles on April 29, 2018 and needed to be removed from the game due to the bicep spasms. There was really no play that showed how or why the injury occured but the organization felt it was serious enough to remove him from the game. Cabrera would miss the following three games for the Tigers with the bicep spasms and returned on Thursday, May 3 against the Kansas City Royals.

During the 6th inning in the game with the Royals, Cabrera was running from first base to second base and strained his right hamstring. Cabrera began limping towards approaching second base and it was abundantly obvious that he had some sort of right leg injury. Cabrera spent time on the disabled list for the injuries and on Tuesday Night, his season came to an end.

Cabrera was at the plate on Tuesday Night in the third inning and swung the bat, in sort of an awkward motion. Cabrera was in the completion of his swing and it appeared that he extended his elbow further than what he normally would on the follow through. Cabrera immediately dropped the baseball bat and began walking towards the Detroit Tigers dugout. Cabrera could be seen grabbing at his bicep and elbow and appeared to be in severe pain.

Cabrera is 35 years old and has a massive contract averaging $30 million dollars per year. He is signed for the next 7 years in Detroit and with injuries plaguing the first basemen, eventually ending his season, one must believe that his time with the Tigers and potentially in the MLB are coming to an end. That being said, Cabrera was still doing well this season at the plate, batting just under .300 in 38 games this year, hitting 3 home runs and 22 RBI’s on a team that 31-37 and 5 ½ games out of first place so it is really hard to determine what the Tigers will do with “Miggy” knowing he has become injury prone and on the downside of his prime.

Last year the Tigers began a fire sale where they parted ways with other veterans such as Justin Verlander and longtime Tiger Justin Upton and it is believed by many that if they could of parted ways with Cabrera, they would have however his large, inflated contract, prevented other teams from making much of an offer for the 11 time All-Star. The Tigers will now turn to Niko Goodrum and John Hicks to replace Cabrera at first base and his spot in the Detroit lineup.

Join us on Telegram to get even more free tips!
« MLB Gives First Update For National League All Star Voting
Near No »
SportingPedia covers the latest news and predictions in the sports industry. Here you can also find extensive guides for betting on Soccer, NFL, NBA, NHL, Tennis, Horses as well as reviews of the most trusted betting sites.
MLB Betting Tips, Predictions and Odds 241