Two NFL Defensive Ends Face Each Other In UFC Octagon 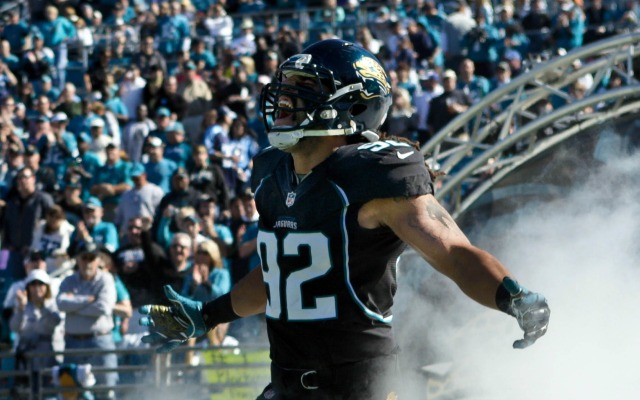 The NFL is known for having scary individuals playing the sport of football but on Tuesday Night, we found out that some of them have a career after football, in the UFC. On Tuesday Night, former Dallas Cowboys Defensive End Greg Hardy and former Jacksonville Jaguar Defensive End Austen Lane met up but this time, it wasn’t on the football field but rather inside the UFC’s octagon.

Hardy is the better known NFL player out of the two, getting drafted by the Carolina Panthers in 2010 and playing for them until 2014. Hardy was voted to the Pro Bowl in 2013, when he notched a career high 15 sacks on opposing quarterbacks. That record number of quarterback sacks, (15), still stands as the all time single season record for the Carolina Panthers.

Hardy’s career with the Panthers came crashing down in 2014, when he was charged with assaulting his girlfriend. This was during a time in the NFL when domestic violence was at the front of every NFL media website across the world, highlighted by the video of Baltimore Ravens Running Back Ray Rice assaulting his girlfriend in a elevator. Hardy was sentenced to 18 months in prison and suspended for 10 games by the NFL.

The guilty verdict and the suspension were both dropped due to the victim not showing up for court. The Panthers made the decision to not re-sign Hardy due to his controversial past but the Dallas Cowboys took a chance on the free agent, signing him to a one year $11.3 million dollar contract. One month later, Hardy was suspended for the first 10 games of the 2015 NFL season without pay for the NFL Personal Conduct Policy, which was eventually reduced to 4 games. Hardy played one season with the Cowboys and was not resigned.

Austen Lane started his career in the NFL after getting drafted in 2010 by the Jacksonville Jaguars. Lane played in the league from 2010 until 2014 for 4 different teams, Jaguars, Kansas City Chiefs, Detroit Lions and Chicago Bears.

Lane moved on and began training for Mixed Martial Arts and had his first amateur MMA fight in November 2015. Lane ran off 5 straight amateur fights, winning all five by first round knockout. In April 2017, Lane made his professional MMA debut and ran off 4 straight fights where he knocked out all 4 opponents in the first round, posting a 4-0 professional MMA record.

On Tuesday Night, Hardy made his pro debut in an event watched by thousands of people around the world on the UFC’s recruiting event, Dana White’s Tuesday Night Contender Series. Hardy would take on Lane and would be drastically overmatched as far as experience goes but what he lacked in experience, he made up in power.

This show features regional fighters from around the world competing with the hopes of impressing Dana White and earning a UFC contract. It is literally the biggest interview of most of these guys lives as earning a contract in the UFC would mean much larger purses than most are use to.

For Hardy and Lane, both of which have made millions of dollars on the football field, this was more about earning respect and less about financial advantages. Many experts felt that with both of these guys having knockout power, this fight wouldn’t last past the first round. The experts were correct.

0:57 seconds into the fight, Greg Hardy landed a solid right cross that floored Lane and ended the fight by knockout! Hardy’s knockout brought Dana White to his feet and eventually earned him a contract in the UFC. The UFC boss said the former NFL player would be given the contract and they would work on getting him more experience. Media will jump on this event and question Hardy for getting rewarded for his checkered past but they must not forget, he was never convicted of assault therefore technically has a clean record.

Join us on Telegram to get even more free tips!
« Colts QB Luck Is One Step Closer To A Return
Cowboys Make Zack Martin Highest Paid Guard In NFL »
SportingPedia covers the latest news and predictions in the sports industry. Here you can also find extensive guides for betting on Soccer, NFL, NBA, NHL, Tennis, Horses as well as reviews of the most trusted betting sites.
NFL Betting Tips, Predictions and Odds 332