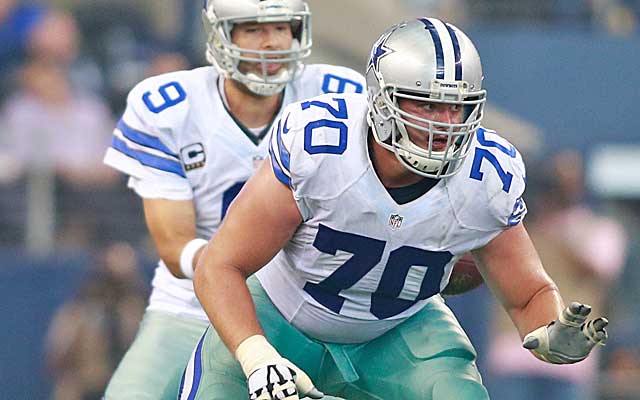 The Dallas Cowboys made certain that their investments in the backfield, Quarterback Dak Prescott and Running Back Ezekiel Elliott, will have some extra cushion, protection and motivation on Wednesday afternoon when they made All-Pro Right Guard Zack Martin the highest paid Guard in the National Football League. Martin and the Cowboys agreed to a six year contract extension in the range of $84 million dollars.

Martin has made the Pro Bowl in every year that he has been in the league, four years. He has also been named first team All-Pro two times in four years and is considered by many as one of the best Offensive Guards in the NFL. Martin is one of only a handful of Cowboys that can hold the title of a completely reliable player. He has played in 16 games in each of his four seasons in the NFL, which for a Offensive Lineman is a very impressive feat knowing they are constantly getting bumped around and rushed by 300 LB Defensive Lineman.

The 27 year old former Notre Dame Fighting Irish Guard has $40 million dollars guaranteed built into the deal and with the agreement to sign the contract extension, provides the Cowboys will the overall highest paid Offensive Line in the NFL. If the Cowboys would not have signed Martin, he would have been a unrestricted free agent at the conclusion of the 2018 season. Martin has always maintained his desire to remain in Dallas and hopefully finish out his career as a lifelong Cowboy. Martin is now signed through 2024 and with the extension in place, he will make $93.341 million dollars over the next seven years.

Originally, Martin had planned on holding out for the OTA’s and the minicamps out of fear that history will repeat itself. When Martin first came in the league, in 2014, he injured Linebacker Sean Lee during the OTA’s and caused Lee to miss the entire 2014 season with a torn left ACL. Martin had made it public that he did not intend to participate in team drills unless a contract was in place.

The Cowboys drafted Martin in 2014 in the first round of the draft however he was not a fan favorite pick in the beginning. Many fans expected the Cowboys to reach out and draft a young Quarterback to replace Tony Romo, most particularly a Quarterback by the name of Johnny Manziel. The draft worked out in favor of the Cowboys as Martin has turned into a complete asset on the team and one of the best players coming out of that year’s NFL draft, while Manziel only lasted just two seasons in the NFL with the Cleveland Browns.

Join us on Telegram to get even more free tips!
« Two NFL Defensive Ends Face Each Other In UFC Octagon
Josh Gordon Claims Browns Are Best WR Squad In NFL »
SportingPedia covers the latest news and predictions in the sports industry. Here you can also find extensive guides for betting on Soccer, NFL, NBA, NHL, Tennis, Horses as well as reviews of the most trusted betting sites.
NFL Betting Tips, Predictions and Odds 332