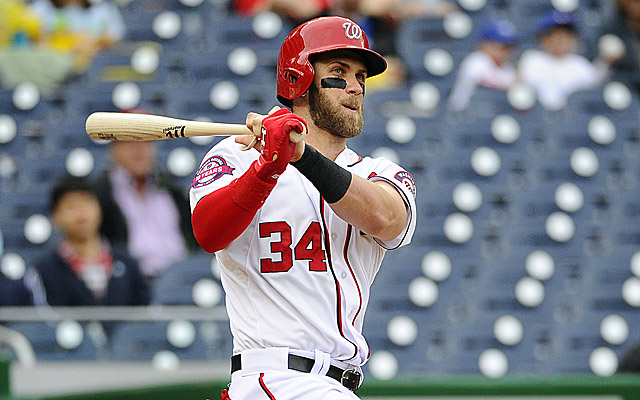 The Major League Baseball All-Star game festivities are just over a month away in the Nation’s Capital of Washington DC. Major League Baseball began tallying votes this week for the leading vote receivers for both the American League and the National League All-Star Game and the rumor mill became active with who will participate in the very popular T-Mobile Home Run Derby.

The All-Star Week’s T-Mobile Home Run Derby is one of the most watched events during the entire week, at some points surpassing popularity of the actual All-Star Game. Home Runs in a baseball game make the game exciting so naturally, when there is a Home Run Derby, the excitement is drastically increased.

Harper leads the National League in Home Runs with 19 long balls in 2018. Last year, Harper hit 29 home runs and in 2016 he hit 24 home runs. Over his seven year career, Harper hit the most home runs in 2015, when he hit 42 long balls. Harper is on pace to shatter his previous record of 42 homers this year as he is only 23 away and only 65 games into the season. In his career, Harper has launched 169 home runs.

This would be the second time that Harper has participated in the popular event. In 2013, Harper made it to the finals before losing to Yoenis Cespedes. Cespedes ended up winning back to back years in the Oakland Athletics uniform. Last year, Aaron Judge won the Home Run Derby at Marlins Park in Miami, Florida and his current teammate, Giancarlo Stanton won it the year prior in the Marlins uniform at Petco Park in San Diego, California.

If Harper was to participate and be fortunate enough to win the Home Run Derby, he would be the first participant to win the event at their home field since 2015 when Todd Frazier did it for the Cincinnati Reds at Great American Ball Park in Cincinnati, Ohio. The only other time that a home field player won the Home Run Derby was back in 1990, when Chicago Cubs Hall of Famer Ryne Sandberg won the events at Wrigley Field in Chicago, Illinois.

Join us on Telegram to get even more free tips!
« Near No
Twins Send 3rd Basemen Miguel Sano To Minor League Assignment »
SportingPedia covers the latest news and predictions in the sports industry. Here you can also find extensive guides for betting on Soccer, NFL, NBA, NHL, Tennis, Horses as well as reviews of the most trusted betting sites.
MLB Betting Tips, Predictions and Odds 241