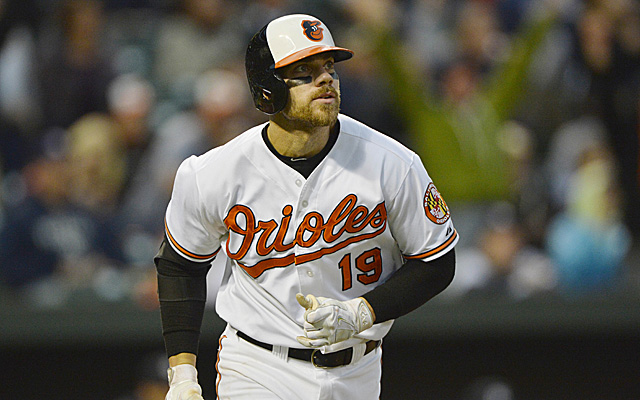 The Baltimore Orioles are having a terrible year and one of their faces of the franchise has been sat down, at least for the immediate future. The Orioles made the decision to sit on Tuesday in their game against the Boston Red Sox and have left him sitting on the bench in Wednesday and Friday’s games as well. On Saturday, Manager Buck Showalter stated that Davis would not play in Saturday’s game for the fourth straight game and his return was not imminent.

Davis has not helped his cause and fans around Baltimore have gotten increasingly frustrated with Davis, who has struggled all year long. Davis is batting a career low .150 batting average in 207 at bats this year. Davis is known for his long ball play but even that is lacking, hitting just four home runs over 57 games this year. Davis is the two time AL Home Run Champion, hitting the most home runs in 2013 and 2015. Davis has struck out 86 times this year and has an on base percentage of just .227.

As the year has progressed, Davis has continuously dropped and is having a all time career low for the season. Davis hit .275 and two home runs in the month of April. Then, in May, Davis hit .220 batting average with two home runs. June has by far been the worst among the season, hitting just .143 in seven games during the month and he has not hit a home run during the month. Davis has not hit a single home run since May 9, against the Kansas City Royals.

With the recent slump, many fans of the Orioles and experts around the league are talking about Davis potentially being the worst contract in MLB history. The Baltimore Orioles signed Davis to a mega contract of seven years and $161 million dollars. No team expects to sign a player, the quality of Davis, to a mega deal like the one he received, and expect him to be the lowest in any category in the majors but that is exactly what has happened with Chris Davis and the Baltimore Orioles.

Davis signed the big money mega deal with the Orioles in 2016 after building home run totals of 53, 26 and 47 home runs in the three years prior. Many people close to the Orioles felt that by the Orioles signing Davis to the large contract, it would prevent them from signing younger talent, like Manny Machado, which has came to fruition and now is the topic of many trade rumors. The Orioles have already stated that they do not have the ability to resign Machado and will allow him to walk away as a free agent at the end of the year if they are unable to put together a valuable trade that is beneficial to the organization.

Davis’s struggles have become so well known around Baltimore that local bars have began offering specials for Davis to simply get a hit. Bartenders Pub, located in Baltimore about 10 minutes from Orioles Park at Camden Yards, have offered free Dr. Pepper shooters for every hit that Davis gets to sort of encourage the player to hit better and to sort of drown out the hurt and pain of Davis’s struggles.

Join us on Telegram to get even more free tips!
« LA Angels Take Major Hit, Send 4 Players To DL On Friday
Houston Astros Win 10th Straight Game On Saturday »
SportingPedia covers the latest news and predictions in the sports industry. Here you can also find extensive guides for betting on Soccer, NFL, NBA, NHL, Tennis, Horses as well as reviews of the most trusted betting sites.
MLB Betting Tips, Predictions and Odds 241