Yankees Have Something Special In Gleyber Torres 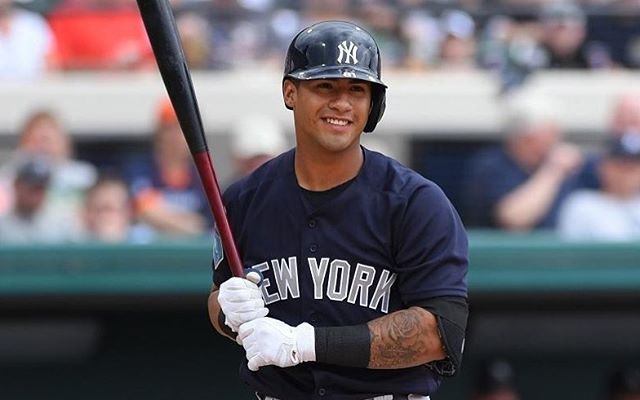 It’s not everyday that someone as special of a player comes along, like New York Yankees second basemen Gleyber Torres. Torres is a 21 year old player that has been in the league for less than two months but has already made a splash in MLB. On Thursday Night, Torres hit his 13th home run of the year, to lead the New York Yankees past the Tampa Bay Rays 4-3. Torres is now hitting .295 batting average, has hit 13 home runs, drove in 33 RBI’s and has drawn 11 walks.

Torres was one of the top prospects in baseball prior to making his debut but no one could of thought he would turn out this good, this fast! Torres has shown consistency at the plate and all thought his numbers have sort of dropped off during the month of June, he has still blasted 4 home runs and hitting better than half of the rest of the team. He came into June hitting .319 and is now hitting .295.

When you take into consideration that his success with the longball was immediate, it makes his numbers even more impressive. He was called up from the minor leagues on April 22, 2018 but didn’t hit his first home run in the big leagues until 13 games later. From that point on, he has turned into a home run smashing machine! There is only one player in the entire MLB that has more home runs than Torres, that includes the two monsters on his very own team in Aaron Judge and Giancarlo Stanton. JD Martinez is the only player with more home runs in such short amount of time.

Earlier last week, Torres became the topic of several trade rumors but it is believed that they are nothing more than that, rumors. Torres has most recently been talked about as possible trade bait to entice the New York Mets with parting ways with Jacob deGrom. The Mets need offense severely and the Yankees are struggling for pitching. This trade would make sense for both parties for achieving and accomplishing their needs but it would make no sense for the Yankees to trade away one of their top prospects that may potentially turn into one of the best players in the league.

Someone could argue that they would be getting one of the best pitchers in the league with deGrom but you would have to weigh in on the value of pitching vs. offense. It’s entertaining to think about the possibilities of big trades like deGrom for Torres but the reality is neither of these teams will part ways with either of their stars.