Odell Beckham Jr Will Not Hold Out For NFL Contract 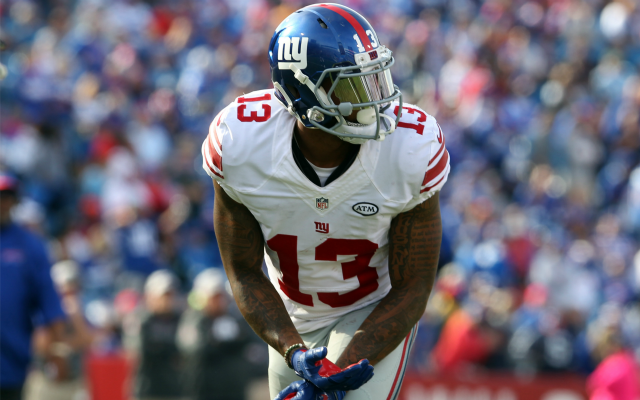 Much of the talk in New York last week was discussion about Odell Beckham Jr and potentially getting a new contract to continue playing football for the New York Football Giants. Beckham has shown interest for many months now in securing a contract extension prior to OTA’s and Minicamps but after the first mandatory minicamp and organized practice, post injury, the Giants Wide Receiver is still without a contract extension.

Earlier this month, there had been talks and speculation that if Beckham did not receive a extension, he would miss all of the minicamps and preseason, out of fear of possible injury, diminishing his value. Beckham is coming off a broken ankle that ended his 2017 NFL Season in October and sidelined the Giants Wide Receiver. Beckham missed the final 11 games of the regular season with the ankle injury. The injury required surgery to repair and was not cleared to participate in offseason activities, until last week. Beckham now sports a fancy scar, that could be visible noticeable during last weeks mandatory minicamp.

During the minicamp, Beckham worked on individual drills without defenders and spent a significant amount of time working with New York Giants Quarterback Eli Manning on some various routes. Whenever the first teamers faced live action against the defense, Beckham did not participate.

Being on the field with the Giants in the minicamp was a sign of good faith to the Giants organization. All though he was limited in participation to three on three drills and other various non-contact drills, the Wide Receiver gave some glimpses that he is healthy and ready to be a important part of this Giants offense.

On Saturday, Beckham put all speculation to rest when asked if the media will see him in training camp of which Beckham replied, “Yes, you will.” Beckham later added that he would not holdout and expected to be suited up for practice and training camp with his team. Beckham was holding his annual youth football camp in New Jersey when he was asked the questions and this was really the first time he has spoken to the media about the potential holdout since October 4, 2017, which was literally days before he injured his ankle and ended his season.

The New York Giants official training camp will start on July 25, 2018. Beckham is coming into the final year of his rookie deal and is expected to draw a steep price tag, no matter what team he signs with. He is due to make $8.5 million dollars in 2018 and his next contract or contract extension could potentially make him the highest paid Wide Receiver in the league.

New York Giants Owner John Mara stated several months ago, when asked, that “No player is untouchable”, which stirred the pot on potential issues between the sides. Originally, Mara stated that Beckham would get his big money contract and that there were no concerns for the player or the organization.

The other option that could potentially occur would be for the New York Giants to place the franchise tag on Beckham, but if that were to happen, it is believed that it would only further throw fuel in the fire between the two sides.

Join us on Telegram to get even more free tips!
« Tom Brady Hints At Possible Retirement
Super Bowl Ring More Important To “Big »
SportingPedia covers the latest news and predictions in the sports industry. Here you can also find extensive guides for betting on Soccer, NFL, NBA, NHL, Tennis, Horses as well as reviews of the most trusted betting sites.
NFL Betting Tips, Predictions and Odds 332