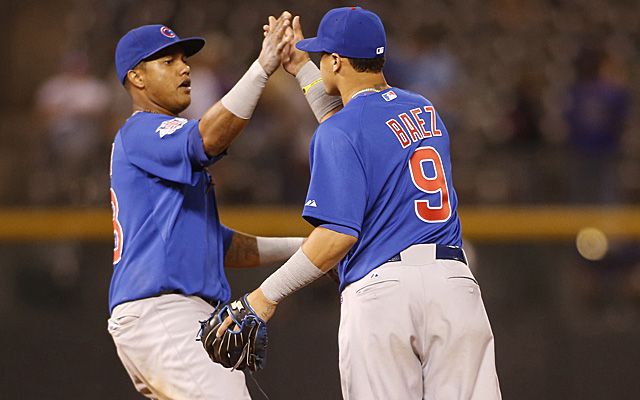 The Chicago Cubs are just a half game out of first place in the National League Central Division behind the Milwaukee Brewers with a home series against the Los Angeles Dodgers on deck. The Cubs have been hovering around the second place spot in the division for the better portion of the season and have gotten extremely close now to overtaking the Brewers for that top spot.

The Cubs are coming into this game, off a series win in St. Louis over the Cardinals. The Cubs won the first two games of the series with the Cardinals but lost in their attempt to get the sweep in game 3 on Sunday Night. Had the Cubs won that game, they would have taken over the first place spot by percentage points but losing the game wasn’t as debilitating as losing a key part of their offense.

In the third inning of the game on Sunday Night, Cubs hot hitter Javier Baez was at the plate and starting pitcher Jack Flaherty was on the mound. Baez is normally the teams Second Basemen but on Sunday he was playing Shortstop.

Flaherty threw a fastball high and inside to brush Baez back off the plate and unfortunately it drilled Baez in the elbow. Immediately upon getting hit, Baez retrieved back in pain grabbing the elbow. Baez dropped the bat and fell to the ground in what seemed to be extreme pain. In a post game press conference, Baez said that he had been icing the injury and it numbed his entire arm. He stated that the elbow was “really sore” and he felt that the pain was going to go away but it did not and to make matters worse, it sort of numbed the entire arm.

The organization believes that the injury is just a deep bruise and he should not miss any significant time. It is anticipated that they will get a quick x-ray on the elbow on Monday just to make sure there is no further injury that could develop into something much greater and serious. Baez didn’t rule out the possibility of playing in the game on Monday Night against the Dodgers.

Baez has been one of the Cubs top offensive threats and all though he is struggling in the month of June, he is the leader in most offensive statistics for the Cubs. Baez is just 7 for 40 in June but overall on the year, he is batting .255 with 62 hits, 14 home runs and 46 RBI’s, both of which lead the team, in 243 at bats, which also lead the team. He has scored 39 of the teams 337 runs, which equates to more than 10% of their total run allotment. He has a On Base % of .807 and as his numbers show, he is a very important part of this offense.

Baez is not expected to miss significant time but these type of injuries always seem to have a lingering effect on the player. Cubs fans will have to take the wait and see approach to determine if Baez will be able to return to the lineup for their upcoming series with the LA Dodgers.

Join us on Telegram to get even more free tips!
« Julio Teheran Returns From DL With 6 No
Houston Astros GM Luhnow Receives Promotion And Extension »
SportingPedia covers the latest news and predictions in the sports industry. Here you can also find extensive guides for betting on Soccer, NFL, NBA, NHL, Tennis, Horses as well as reviews of the most trusted betting sites.
MLB Betting Tips, Predictions and Odds 241