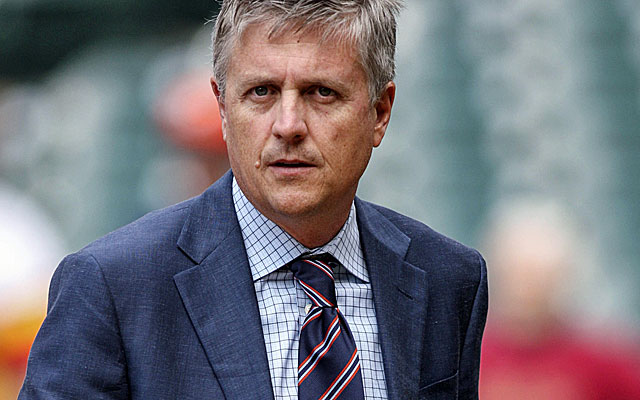 The Houston Astros have become one of the best franchises in baseball and their recent success has turned into a promotion and contract extension for General Manager Jeff Luhnow.  Luhnow and the Astros agreed to a contract extension through 2023 and he was promoted to President of Baseball Operations. The financial parameters of the deal were not disclosed but it is expected to be somewhere between $5 million and $10 million dollars, which is the range of New York Yankees GM Brian Cashman and Chicago Cubs President of Baseball Operations Theo Epstein.

This is Luhnow’s second contract extension with the team.  In 2014, Luhnow agreed to an extension with the team after spending the past three years with the organization.  Luhnow developed a roster of talent on the Astros to get them to a World Series Championship last year and to continue their success for many years in the future.

The Astros are currently in first place in the American League West Division and are 1.5 games ahead of the Seattle Mariners for the top spot in the division.  They have a 48-25 record, which is the third best record in the major leagues behind the New York Yankees and the Boston Red Sox. Currently, the Astros are on a 11 game win streak and are the hottest team in baseball.  The Astros are slightly behind the Yankees and Red Sox with their record but that could potentially change as they will now play 19 straight games against an opponent with a losing record.

Luhnow is considered one of the best in his profession at scouting young talent and developing players into major league players.  He is widely known as a executive that can bring out the best in players and his encouragement on the field makes players happy to play for him and coaches excited to win for him.  He took a team that was one of the worst in the American League with consecutive 100+ losing seasons and made them World Champions.

Luhnow took over a team in 2011 that played subpar, under .500 in back to back seasons.  The Astros had 100+ loss seasons in his first three years with the Astros but then dropped to 92 losses in 2014.  In 2015, he took the team to the playoffs but fell short in losing to the Kansas City Royals in the American League Divisional Series.  In 2017, the Astros went to the playoffs again and this time, won the AL Pennant and the World Series!

The Astros recently locked up their franchise second basemen Jose Altuve but there are several players that will need to be resigned at the end of this year.  That is where Luhnow will have to earn his money. Players such as Dallas Keuchel and Charlie Morton will be due for contract extensions at the end of this season while players like Carlos Correa, George Springer, Gerrit Cole and Justin Verlander are all on deck for free agency the following year through 2021.

Join us on Telegram to get even more free tips!
« Cubs Lose Key Offensive Player Sunday Night In Loss To Cardinals
Washington Nationals Trade For Closer »
SportingPedia covers the latest news and predictions in the sports industry. Here you can also find extensive guides for betting on Soccer, NFL, NBA, NHL, Tennis, Horses as well as reviews of the most trusted betting sites.
MLB Betting Tips, Predictions and Odds 241