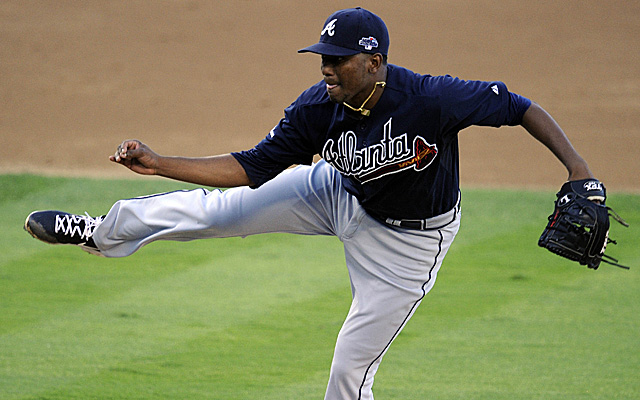 The Atlanta Braves are in first place in the National League East Division and it appears that they just got a little bit better! On Sunday, Julio Teheran returned from the disabled list and was spectacular in his return. Teheran struck out eleven batters on Sunday, in the Atlanta Braves 4-1 win over the San Diego Padres. Teheran did not allow a hit in the game and pitched a six inning shutout over the Padres. Teheran left in the sixth inning due to his pitch count being at 95 and a cramp in his right hamstring.

Up until this game, he really hadn’t been overpowering any opponents and pitched mediocre but the importance of getting him back in the rotation was extremely important due to the Braves placing Mike Foltynewicz being played on the disabled list and limiting the starting rotation. The Braves were not going to allow Teheran go nine innings even if he had the potential no-hitter still in effect.

Braves Manager Brian Snitker stated that he was very happy with Teheran’s performance and said that he did exactly what the Braves wanted him to do. Snitker spoke about Teheran’s first two innings in the heat and how it affected him late in the game. Teheran had a 24 pitch first inning, in the 90 plus degree weather and whenever it is that hot outside, there is always concern for cramping due to dehydration.

The Braves lost the no-hitter in the seventh inning, as reliever Shane Carle came in from the bullpen and gave up a single to Cory Spangenberg. At the end of the day, the Braves bullpen gave up 6 hits and 1 earned run in the game but still got the win for Teheran by the score of 4-1. Teheran is now 5-4 on the year and will look to make his next start, most likely against the Baltimore Orioles later this week. Teheran should have decent success in his second outing against a Baltimore Orioles team that is struggling in every facet of the game.

Teheran’s velocity on his fastball was decent and he was shutting opposition down with his slider. His fastball was averaging right around 92-93 mph. At one point, Teheran shut down 15 consecutive batters and was rolling through a weak San Diego Padres lineup.

With the win today, the Atlanta Braves now have a 3.5 game lead over the Washington Nationals. They are now 42-29 and will now head north of the border where they will take on the Toronto Blue Jays in a two game set, before traveling back home to take on the Baltimore Orioles in three games.

Join us on Telegram to get even more free tips!
« Longoria To Have Surgery, Miss 6 To 8 Weeks
Cubs Lose Key Offensive Player Sunday Night In Loss To Cardinals »
SportingPedia covers the latest news and predictions in the sports industry. Here you can also find extensive guides for betting on Soccer, NFL, NBA, NHL, Tennis, Horses as well as reviews of the most trusted betting sites.
MLB Betting Tips, Predictions and Odds 241