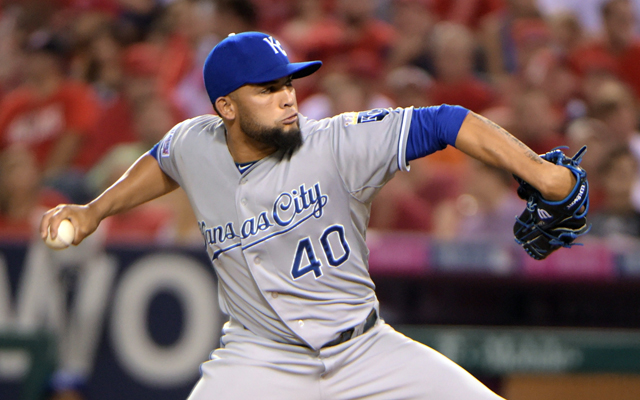 The Washington Nationals have always had one of the top starting rotations in baseball with the likes of Max Scherzer, Stephen Strasburg, Gio Gonzalez, Tanner Roark, and either Jeremy Hellickson or Erick Fedde picking up the slack in the fifth starter spot. The Nationals have the #2 combined team ERA in the National League and it just got a little bit deeper as they now have a talented closer to add to the mix.

The Nationals were not going to wait until the trade deadline and risk missing out on one of the best closers available on the market. On Monday, the Nationals and the Kansas City Royals agreed to a trade that will send closer Kelvin Herrera from the Royals bullpen to the Nationals bullpen in exchange for three players. Herrera was considered one of the top closers available on the trade market this season and will be approaching free agency at the end of 2018, after agreeing on a one year deal last season worth $7.9 million dollars. Herrera will become an unrestricted free agent at the end of the year.

Herrera 1-1 on the year with a 1.05 ERA over 25.2 innings for the Kansas City Royals this season with 14 saves. Herrera is a two time All-Star and will now head to the city where the 2018 All-Star game will be hosted, Washington DC. Herrera is known for his sizzling fastball that averages slightly above 96 mph, a completely confusing slider and a very nice speed dropping changeup. Herrera will leave the Royals after spending his entire career in Kansas City.

For Kansas City, they will receive three players that are high prospects as they are in the rebuilding phase of their organization. The Royals will receive minor league players in infielder Kelvin Gutierrez, outfielder Blake Perkins and right handed pitcher Yohanse Morel. Gutierrez has been in the minor league system for six years and has played various positions in the infield but mainly Third Base, however he has shared time at both First Base and Shortstop in 2018. He is currently hitting .274 with five home runs at Double A Harrisburg.

Perkins is a young 21 year old player that has played centerfield in High-A ball this year. He has been with the organization since 2015, when he was drafted in the second round. Perkins is hitting .234 at Potomac and bats from both sides of the plate. Morel is the youngest of the three players at just 17 years old and has just one start under his belt at the pro level.