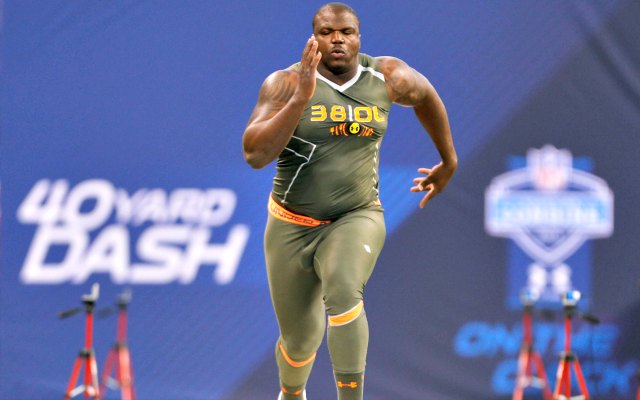 On Tuesday, their signing spree continued as the Browns signed former #2 overall draft pick Greg Robinson. Robinson has been out of the league since week 6 of last year, when he was waived by the Detroit Lions. The Browns will be looking to snap a streak where they have lost 15 of their last 16 games over the past two seasons. The Browns have been the laughing stock of the NFL over the last several years and have a coach sitting on the hot seat, with the urge to win for the city of Cleveland.

Robinson was originally drafted by the LA Rams with the #2 draft selection in the first round of the 2014 NFL Draft. Robinson played his college football at Auburn and was considered the best Offensive Tackle coming out of college that year. Robinson spend three years with the Rams before getting traded to the Detroit Lions last year for a 2018 6th round draft pick. This may be the final shot the Robinson gets in his career to play in the NFL as teams may not risk signing him with previous injuries and failed attempts to make it in the league.

Robinson’s NFL career has been steady, playing in 16 games in both his first two years with the Rams and then 14 games in 2016. For the Lions, Robinson was only able to play 6 games for Detroit before getting waived after battling a ankle injury. The injury is completely healed now and permitting Robinson passes team physicals from the Cleveland Browns, he will be offered a chance to compete for a spot on the opening day roster.

Robinson will add size to the line but he will need to improve his skill set if he wants to remain with the Browns. Cleveland has has perennial Future Hall of Famer Joe Thomas with the organization since 2007 and finally hung up the pads at the end of last year. Thomas was one of the most reliable and injury safe players, not only on the Browns but throughout the NFL. Thomas played every single game from 2007 until 2017, when he only lasted 7 games with injuries.

Robinson will be larger than Thomas but his skill set is questionable. This signing may have a bit to do with the fact that Browns Offensive Tackle Donald Stephenson getting suspended for two games. Stephenson was signed for one year but was issued a suspension just days ago for the league’s substance abuse policy violation.

With Stephenson on the sidelines for at least the first two games of the regular season, Robinson may get the much needed shot at impressing the organization and let other teams see that he belongs in the NFL.

Join us on Telegram to get even more free tips!
« Super Bowl Ring More Important To “Big
Tampa Bay Bucs QB Expects Suspension To Be Handed Down »
SportingPedia covers the latest news and predictions in the sports industry. Here you can also find extensive guides for betting on Soccer, NFL, NBA, NHL, Tennis, Horses as well as reviews of the most trusted betting sites.
NFL Betting Tips, Predictions and Odds 332