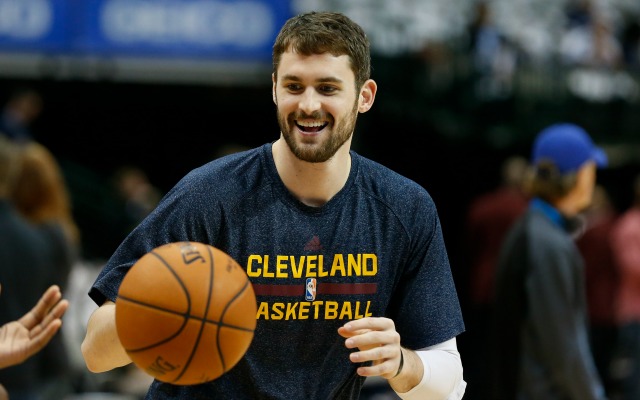 Love’s situation has without a doubt taken a backseat to the whole LeBron James “Stay or Go” situation. McMenamin is reporting that “Regardless of what decision LeBron James makes about his future in Cleveland”, the organization would still like to retain Kevin Love.

Love is under contract with the Cleveland Cavaliers for at least the next two years and will make $49.7 million dollars over the two years. Love is slated to bring in $24.1 million next year and $25.6 million the following year, which will be the final year of his contract. Love inked a five year deal back in 2015 and is expected to bring in a decent amount of teams bidding on him permitting he will remain healthy.

Love is a five time All-Star that has really struggled with some major injuries over the past year in Cleveland. Love played in just 59 games in 2018 due to his various injuries. Love broke his hand on January 30 and was forced to miss 20 games with the injury. When he came back from the injury, LeBron James was playing with an entirely different set of supporting cast. Love also dealt with concussion injury late in the season, as well as a knee injury that forced him out of some games.

With so many injuries in one year, teams may be cautious in the first place, with even trying to make an offer for Love. Love averaged 17.6 points per game and 9.3 rebounds per game. His numbers crashed in the playoffs, where he averaged just 14.9 points per game and 10.2 rebounds per game. He is 29 years old would like to play the forward position. It definitely affected him with moving to Center in the playoffs, where he has stated he doesn’t feel comfortable and wasn’t at his best with shooting.

The Cavaliers will be picking 8th in the NBA Draft on Thursday and will look to use that selection to bolster their team as sort of an enticement to keep LeBron James. Many people close to the situation do believe that if a offer was put on the table that included Love and the draft pick, in return for a mega star player, the Cavaliers would jump on the offer and accept the deal.

Love has stated in the past that he would love to play the remainder of his career with LeBron James but has also stated that he would like to remain in Cleveland. Love may not have much of a choice in the matter as James may end up leaving on his own to head to a team of his choosing.

Join us on Telegram to get even more free tips!
« Nets And Hornets Swap Centers
Dallas Mavericks Will Pursue “Boogie” Cousins »
SportingPedia covers the latest news and predictions in the sports industry. Here you can also find extensive guides for betting on Soccer, NFL, NBA, NHL, Tennis, Horses as well as reviews of the most trusted betting sites.
NBA Betting Tips, Predictions and Odds 1363