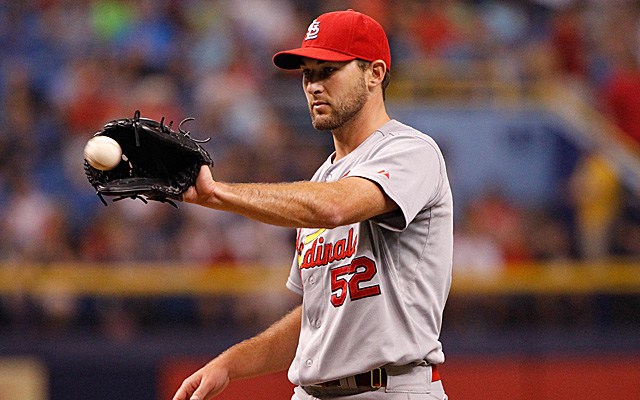 On Thursday afternoon, the St. Louis Cardinals placed pitcher Michael Wacha on the Disabled List with a left oblique strain. Wacha injured his oblique yesterday in his start against the Philadelphia Phillies. Wacha lasted into the fourth inning and was pulled from the game after he was unable to continue and showed signs of being in severe pain. Wacha was sent home on Thursday so that he could have a MRI to determine the extent of the injury. There is no word out of St. Louis on the results of the MRI.

Wacha stated that the injury hurt so bad, that it caused pain for him to breathe. With the injury being this painful, it is anticipated that Wacha could have an extended stay on the disabled list. He is currently on the 10 day DL but that may very well be extended if the pain continues and the results of the MRI.

Wacha was making his 16th start of the season and was having a really good year. Wacha had gone 8-2 on the year and had a respectable 3.20 ERA for the St. Louis Cardinals. Prior to Wednesday’s game, Wacha has won 3 of his last 4 starts and has been one of the Cardinals most reliable pitchers in 2018. In his start on June 15 against the Chicago Cubs, Wacha was hammered for 7 hits and 8 earned runs in his first loss since his first start of the season, against the New York Mets.

Wacha has only allowed three teams to score three or more runs on him this year and with the exception of that debacle against Chicago, he really hasn’t pitched a really bad game all year. He will miss a minimum of two starts with this disabled list trip. Wacha was potentially on his way to an All-Star nomination as he was having one of the best seasons in the MLB.

The Cardinals recalled John Gant to fill the void left open by Wacha. This will be Gant’s third trip to the big leagues in the 2018 season. In his three prior starts, he has gone 1-2 with a 4.74 ERA. Gant was playing in Triple A Memphis and will now get another shot in the big leagues. At Triple A Memphis, Gant was 5-1 with a 1.65 ERA over 8 starts at the minor league level.

Gant will most likely make his first start of this stint on Monday against the Cleveland Indians. The organization may also bring up Dakota Hudson to make spot starts. He is the number three prospect and considered by many as having a future spot in the Cardinals rotation.

Join us on Telegram to get even more free tips!
« Indians Pitcher Becomes First To 11 Wins In MLB
First Place Arizona Diamondbacks Are About To Get Better »
SportingPedia covers the latest news and predictions in the sports industry. Here you can also find extensive guides for betting on Soccer, NFL, NBA, NHL, Tennis, Horses as well as reviews of the most trusted betting sites.
MLB Betting Tips, Predictions and Odds 241