First Place Arizona Diamondbacks Are About To Get Better 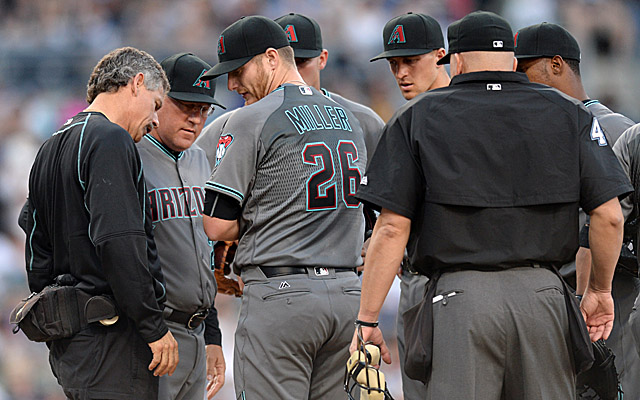 The Arizona Diamondbacks are sitting in first place in the National League West Division. They are 41-33 on the season and have a 2.5 game lead in the division over the LA Dodgers. The Diamondbacks have been a very streaky team, winning 21 of their first 29 games and have gone 20-25 since. The Diamondbacks are in the midst of a stretch of games that will allow them to put some cushion between themselves and the rest of the NL West, as they play their next 10 games against teams that do not have a winning record.

Miller played four games during his rehan, two with Double-A Jackson and two with High-A Visalia, and will now return to the Arizona Diamondbacks. Miller is tentatively scheduled to make his first start of the season for the big league against the Miami Marlins on Monday. To make room for Miller, the Diamondbacks will send Matt Koch back to the minors, which took place on Wednesday.

In addition to Miller, the Diamondbacks are also slated to get Robbie Ray back in the lineup. Ray was one of the Diamondbacks best pitchers in 2017 but only made 6 starts in 2018 before suffering a oblique strain that placed him on the DL. Ray is 2-0 on the season with a 4.88 ERA. He has looked decent in his rehab starts at Triple-A Reno. On Tuesday, he went 4.1 innings and gave up three hits and one earned run, while striking out nine batters.

In addition to getting back two key pieces to their pitching rotation, the Diamondbacks have been at the front of many of the rumors circulating around Baltimore Orioles All-Star Shortstop Manny Machado. Machado is crushing the ball this year, hitting .310 on the season with 18 home runs and 53 RBI’s on the worst team in the majors. Machado would bring a potent bat to the Diamondbacks lineup, that they have been missing this season.

The Diamondbacks have the worst team batting average in the National League at .227 and Machado would immediately bring a boost, leading the team in Batting Average, Home Runs and RBI’s. With Machado in the lineup, the Diamondbacks would have a heavy potent top of the lineup including Jon Jay, Paul Goldschmidt, Jake Lamb, Manny Machado and David Peralta.

If you add in the fact that the Diamondbacks will get back AJ Pollock and Steven Souza Jr sometime this season, this team could have the best lineup in baseball. They are in first place and only getting better. With the team playing well and getting the key pieces back in their everyday lineups, it’s hard to figure that they won’t contend for at least the NL West Title.

Join us on Telegram to get even more free tips!
« Cardinals Pitcher Michael Wacha Headed To DL
Bryce Harper Will Participate In Home Run Derby If He Makes All »
SportingPedia covers the latest news and predictions in the sports industry. Here you can also find extensive guides for betting on Soccer, NFL, NBA, NHL, Tennis, Horses as well as reviews of the most trusted betting sites.
MLB Betting Tips, Predictions and Odds 241