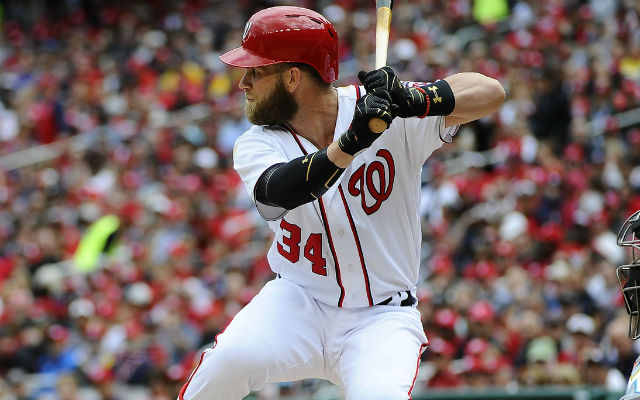 The 2018 MLB All-Star Game will be held in the Nation’s Capital this year in Washington DC. With the All-Star Game being played in the home of the Washington Nationals, the MLB made it publicly known that they would like for powerful slugger Bryce Harper to participate in the All-Star Home Run Derby. Two weeks ago, the MLB made it known that they wanted Harper to participate but the Nationals Outfielder wasn’t sure at the time if he wanted to participate.

On Friday afternoon, Harper answered the questions about his participation in the Home Run Derby by informing The Washington Post that he will play if he makes the All-Star team roster. Harper stated in a text message “So count me in for the Derby if and only if I make the team.” This is a great turnaround as when he was asked several weeks ago, he stated that he was unsure.

The MLB was hoping that Harper would participate, especially after getting word from the likes of former champions Aaron Judge and Giancarlo Stanton, that they would sit this year out of the Home Run Derby. With Stanton and Judge sitting out this year’s Derby, they were without any big name stars that would make this event exciting and interesting to fans.

The All-Star Home Run Derby is one of the most popular events during the All-Star Game Week and always has some of the highest ratings for TV viewers each year. This year will naturally be no different, especially with Harper being the hometown hero participating in the Home Run Derby and leading the National League in Home Runs.

This will be the first time since 2013 that Harper has participated in the Home Run Derby. That year, the Home Run Derby was held in CitiField in New York. The 25 year old Harper is a five time All-Star but is in a slump currently hitting .213 with 19 home runs and 45 RBI’s. Harper has really struggled during the month of June, where he is hitting just .133 through June 22.

Harper’s accolades are a mile long but one thing that would look nice on his trophy shelf is the Home Run Derby Trophy. Harper has been named the 2012 Rookie of the Year, 2015 NL Most Valuable Player, 2015 Hank Aaron Award and the 2015 Home Run Champion.

Join us on Telegram to get even more free tips!
« First Place Arizona Diamondbacks Are About To Get Better
Blue Jays Pitcher Suspended 75 Games »
SportingPedia covers the latest news and predictions in the sports industry. Here you can also find extensive guides for betting on Soccer, NFL, NBA, NHL, Tennis, Horses as well as reviews of the most trusted betting sites.
MLB Betting Tips, Predictions and Odds 241