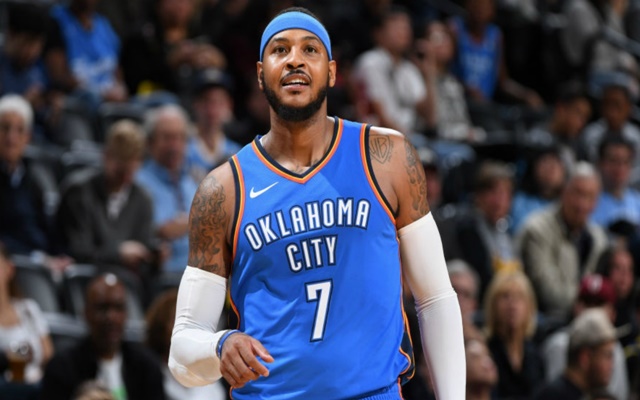 The relationship between Carmelo Anthony and the Oklahoma City Thunder organization was less than pleasing for both parties in 2017-2018 but at least one part of the equation wants another round in the relationship. Anthony announced on Saturday that he will return for the 2018-2019 NBA Season. Anthony’s contract with the Thunder had an early-termination clause that gave him the chance to get out of the contract if he was unhappy, or he could stay and make just under $28 million dollars.

Anthony chose the second of the two options. Anthony will be remaining in Oklahoma City even though he has expressed his concern over how he is used with the Thunder. Anthony felt that there was no real game strategy to use him and felt that he would be better off if he was to be used in a manner that keyed around his presence on the court. Anthony felt that it is more beneficial to him as a player, to be an intricate part of the game plan, to make him more effective as a player for the Thunder.

For the other side of the equation, the Thunder would like nothing more than to find a way to part ways with Anthony but that doesn’t appear to be in the cards. Anthony is owed near $28 million dollars and with his subpar performance in 2017-2018, it will be very hard for the Thunder to convince another team to take on the disgruntled player. The reality is no team is going to risk taking on a problem, especially know that the problem and drama that comes along with Anthony, are not outweighed by his play on the court.

Anthony had career lows across the board in the stat line. He posted 16.2 points per game, 1.3 assists per game and just over 32 minutes per game for the Thunder. He shot just 40.4% from the field during the regular season and less than that in the playoffs. Anthony has averaged at least 20 points per game in each of his seasons in the NBA however last year was far from meeting his career average.

Anthony is a ten-time NBA All-Star and has been a stat line competitor throughout his career. He has always been one of the more active scorers on the court throughout his career but at 34 years old, most feel he is on the downside of his prime. He is in the final year of a five-year contract that he signed with the New York Knicks in 2014. Anthony and the Thunder went to the playoffs last year, after posting a 48-34 record in the regular season. They were the four seed in the Western Conference Playoffs, making an early exit from the playoffs after falling to the Utah Jazz in the first round.

With Anthony not exercising his early termination clause and agreeing to stay and play basketball in Oklahoma City, the only other option for the Thunder to rid themselves of Anthony would be to offer a buyout, which in essence would allow Anthony to go play elsewhere and make more money between his buyout and the potential salary he would get with his new team.

Join us on Telegram to get even more free tips!
« LA Lakers Say No Thank You To LiAngelo Ball At Summer League
Hornets Want Kemba Walker For The Long Haul »
SportingPedia covers the latest news and predictions in the sports industry. Here you can also find extensive guides for betting on Soccer, NFL, NBA, NHL, Tennis, Horses as well as reviews of the most trusted betting sites.
NBA Betting Tips, Predictions and Odds 1369