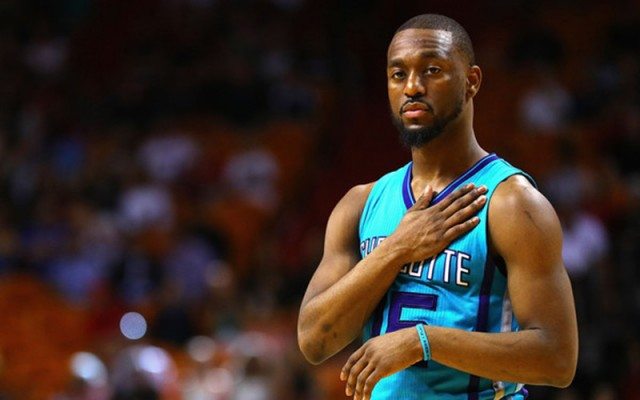 Recent rumors circulating around the NBA and the LeBron James situation in Cleveland has turned to the Cavaliers possibly working avenues that would keep James a Cavaliers. Many experts close to the situation have reported that they have shown interest in Charlotte Hornets Point Guard Kemba Walker and believe that if they are able to somehow lure Walker away from the Hornets, they will increase their chances of signing James in Cleveland.

There is just one problem with that scenario….the Charlotte Hornets are unlikely to ever part ways with Walker and their GM Mitch Kupchak verified that claim on Saturday stating that in a perfect world, they would be able to sign Kemba Walker to a contract, not just for the upcoming year but for the rest of his career.

Walker was drafted by the Hornets in 2011 and has spent his entire career with Charlotte. Walker is 28 years old and still very young in his prime. Walker has never really had a supreme star player, like LeBron James playing on the same court as him, on the same team, and being able to contend for a potential NBA Championship. Walker is a two time NBA All-Star and has really come into his own over the past few years. That being said, this is the second year in a row that Walker and the Hornets have not made the playoffs.

Walker has played on the Hornets, who had a losing record in 2017-2018 and still managed to average 22.1 points per game and 5.6 assists per game. Walker is coming up on the final year of his contract, which he signed in October of 2014 for four years and $48 million dollars. Walker is in a unique situation because he can not sign an extension with the team before he becomes a free agent in 2019 due to cap issues.

Walker will make just $12 million dollars this year, a number much lower than most other Point Guards of his talent level. He is drastically underpaid but unable to sign an extension due to Charlottes extremely tight salary cap.

Kupchak stated that he and Hornets Owner Michael Jordan have said that Walker will be the “Focal Point” of the franchise and will do whatever is necessary to make sure he plays in a Charlotte Hornets uniform. That is sort of conflicting from what he has said in the past. In May, Kupchak stated that in order to improve the lineup, he needed to completely break down the roster and rebuild however in that same interview, Michael Jordan stated that he wasn’t looking to deal Walker and wouldn’t even consider it without getting an All-Star player in return, which at the time was speaking of San Antonio Spurs disgruntled defensive juggernaut, Kawhi Leonard.

LeBron James has until June 29 to make up his mind on the future and his decision on the final year of his contract. A league source has stated that the only way the Cavaliers have a chance to retain James is by trading for Kemba Walker.

Join us on Telegram to get even more free tips!
« Carmelo Anthony Staying Put In Oklahoma City
Nuggets Decline Option On Nikola Jokic »
SportingPedia covers the latest news and predictions in the sports industry. Here you can also find extensive guides for betting on Soccer, NFL, NBA, NHL, Tennis, Horses as well as reviews of the most trusted betting sites.
NBA Betting Tips, Predictions and Odds 1385