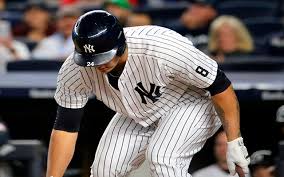 The New York Yankees lost their third straight game on Sunday against the Tampa Bay Rays by the score of 7-6 in the 12th inning. The New York Yankees were swept in a three-game series against the Rays in Tampa Bay on Friday, Saturday and Sunday but more important than losing three games, was the fact that they may have lost one of their top offensive threats in Catcher Gary Sanchez.

Sanchez was trying to beat out a double play ground ball in the 10th inning and injured his right groin and hip abductor. These type of injuries are nagging ailments and seem to take a significant amount of time to heal. New York Yankees Manager Aaron Boone stated that the injury will most likely require a stint on the disabled list but wouldn’t lock himself into the decision on Sunday.

Sanchez will head home and get an MRI on Monday with the Yankee team doctors. The Yankees aren’t going to rush to send Sanchez to the DL as they will hope the injury isn’t as serious as it initially appears. The 25-year-old Dominican Republic Catcher went 0-4 on Sunday and has been in a bit of a slump at the plate. Sanchez is hitting just .194 on the year but is retaining some pop in his bat with the long ball as he has hit 14 home runs on the season. Sanchez has really had his issues at the plate in the month of June. He was hitting just .130 in the month of June with two home runs and six RBI’s in the entire month.

Sanchez was replaced by Austin Romine in the bottom of the 10th inning and should continue to get some extra time with Sanchez on the sidelines. The Yankees will also most likely recall Kyle Higashioka from Triple-A as the backup Catcher for Romine’s off days while Sanchez is unable to play.

The New York Yankees are hoping that this injury to Sanchez is not long-term and he will somehow be able to play no later than their second series this week. The Yankees will kick off the week with a three-game set in Philadelphia against the Phillies before heading home to host the Boston Red Sox for three games, which will decide who is in first place in the American League East.

After the series with the Red Sox, the Yankees will host the National League East’s first-place Atlanta Braves for three games. The Yankees have a tough schedule over the next 10 days and could use the power in Sanchez’s bat.

Join us on Telegram to get even more free tips!
« Cubs Kris Bryant Misses Second Straight Game
Toronto 3rd Baseman Josh Donaldson Has Another Setback »
SportingPedia covers the latest news and predictions in the sports industry. Here you can also find extensive guides for betting on Soccer, NFL, NBA, NHL, Tennis, Horses as well as reviews of the most trusted betting sites.
MLB Betting Tips, Predictions and Odds 241