Ben Simmons Wins The NBA Rookie of the Year Award 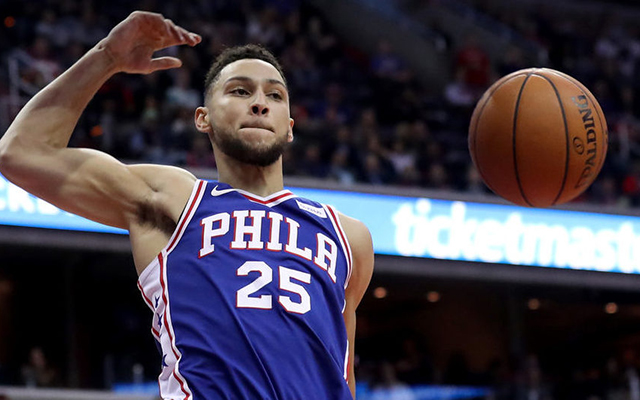 In what most people would call the closest contest throughout the NBA, Ben Simmons took home the award on Monday Night for the NBA’s Rookie of the Year. Simmons was competing against the Utah Jazz’s Donovan Mitchell and the Boston Celtics Jayson Tatum and for the most part, it was a three-way coin toss to decide the winner. There has been talk all year on who was the best rookie and furthermore, what classifies a player as a “rookie”.

Simmons was drafted by the Philadelphia 76’ers with the first overall pick in the 2016 NBA Draft. Simmons went on to play in the 2016 Summer League and was named the All-Las Vegas Summer League First Team. Simmons was preparing for the 76’ers season and in their final training scrimmage, he rolled his ankle.

Originally, the injury was suspected to be minor but an X-Ray and an MRI showed that he sustained a fractured fifth metatarsal bone on his right foot. Initially, Simmons was expected to me three to four months from the Sixers regular season but the organization took the safe road and sat him out the entire season. That pushed his eagerly anticipated NBA debut to last year, where he shined among his peers.

Simmons averaged 15.2 points per game 8.2 assists per game and helped lead his team to the NBA postseason. Simmons played on the team with a young supporting cast and still was able to make a name for himself with the likes of Joel Embiid and Markelle Fultz, who was Philadelphia’s true Rookie.

Donovan Mitchell could argue that his numbers and overall yearly statistics should have earned him the Rookie of the Year Award. Mitchell was the 2018 Slam Dunk Contest Winner and went on to lead his team to the NBA Playoffs. Mitchell and the Jazz took out the lower ranked Oklahoma City Thunder in the postseason and then were eliminated by the #1 seed overall, Houston Rockets.

Mitchell averaged 20.5 points per game and 3.7 assists per game, on a team that was defense first oriented. Mitchell and the Jazz played one of the slowest paces in the NBA and he was still able to boost crazy numbers in each game. Mitchell didn’t have the talent surrounding him all year due to various injuries on the Jazz like Simmons did so you could make the argument that he was more deserving simply because he was forced to take on more of a leadership role in Utah.

Jayson Tatum was the other candidate and all though he didn’t put up the numbers Simmons and Mitchell did, Tatum still had a great year as a rookie. Tatum played on the Celtics, who were absolutely decimated with injuries throughout the year. Tatum stepped up and averaged 13.9 points per game and 5 rebounds per game. Tatum took the Celtics to the playoffs and did so without their main leader, Kyrie Irving, who was injured and sitting on the sidelines for the end of the regular season and the entire playoffs.

Join us on Telegram to get even more free tips!
« James Harden Is NBA’s Most Valuable Player
Wizards and Clippers Agree To Trade In NBA »
SportingPedia covers the latest news and predictions in the sports industry. Here you can also find extensive guides for betting on Soccer, NFL, NBA, NHL, Tennis, Horses as well as reviews of the most trusted betting sites.
NBA Betting Tips, Predictions and Odds 1385