Kevin Durant To Opt Out Of Contract 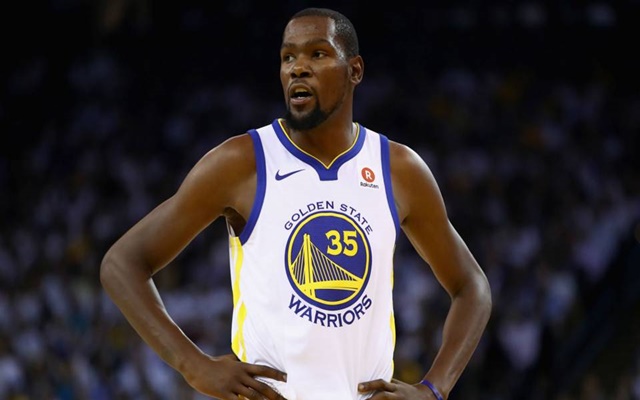 The Golden State Warriors re-signed Kevin Durant last year in what most would call blockbuster savings. They signed the 2018 NBA Finals MVP to a deal of two years and $53 million dollars, which he gladly accepted to remain part of the legacy they are building in Oakland. The truth be told, Durant knew bigger money contract was on the way and he sacrificed a year in contract to gain a vast amount of money and success.

ESPN’s Chris Haynes is reporting that Durant will opt out of his current contract with the Golden State Warriors sometime over the next few weeks. That being said, don’t expect Durant to be going anywhere. The talented Shooting Forward will be restructuring his contract with the Warriors and will be preparing himself for one heck of a payday.

Durant knew he could of went out on the market when he resigned last year and if that would of happened, he would of set record-breaking contract history by writing his own check. But that didn’t happen. He stayed loyal to the Warriors organization and stayed true to his word that he wanted to win several championships with the team. That will pay off bigtime for the NBA Finals MVP as he is going to receive an enormous payday, right at home with his current team, Golden State Warriors.

The move on part of the Warriors is a risky one but they have complete faith that Durant wants to play in Golden State for the long haul. Durant will decline the player option on his contract and initially enter the free agency market but he will be immediately signed by the Golden State Warriors.

Durant could legitimately decline the offer and then sign with another team but the likelihood of that happening are slim to none. He has won back to back NBA Titles with the Warriors and will not want to upset the apple cart by leaving the organization while they are building a legacy. The legacy being built is not only for the Warriors organization but also for Durant, who is coming off back to back MVP Finals campaigns.

Durant has been in the NBA for eleven years and is 29 years old. He is still very early in his prime and his upside is immeasurable. The 2007 first round draft pick of the Seattle Supersonics, turned Oklahoma City Thunder, played his college ball at Texas and is highly regarded as one of the best players in the league. He initially signed with the Golden State Warriors, after departing the Thunder in 2016.

By declining his option, Durant will be turning down $26.2 million dollars but he will have a mega deal on the horizon as the nine-time NBA All-Star will potentially break the bank with the check he will submit with his next contract. The move is expected to take place by the end of the month when the free agency market opens for business!

Join us on Telegram to get even more free tips!
« Wizards and Clippers Agree To Trade In NBA
PG13 To Enter Free Agency »
SportingPedia covers the latest news and predictions in the sports industry. Here you can also find extensive guides for betting on Soccer, NFL, NBA, NHL, Tennis, Horses as well as reviews of the most trusted betting sites.
NBA Betting Tips, Predictions and Odds 1385