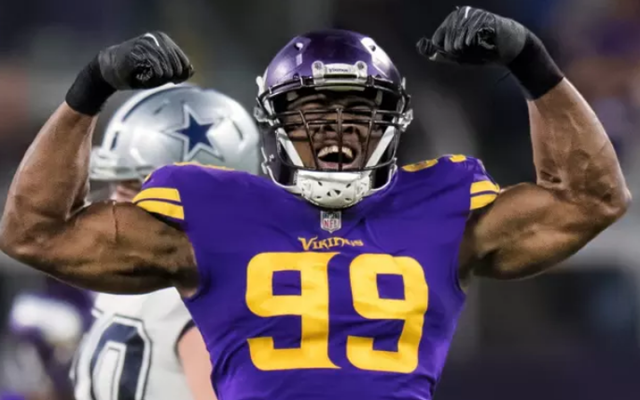 The Minnesota Vikings took steps on Wednesday afternoon to make sure a key part of their dominating defense will be back in uniform for the foreseeable future. They agreed to terms with defensive end Danielle Hunter for a contract extension that measures up to five-years and $72 million dollars. Hunter will get $40 million dollars in guaranteed money and will also receive a $15 million dollar signing bonus.

Hunter has been a steal for the Vikings, who drafted him in the third round of the 2015 NFL Draft. He was selected as the 88th overall pick in the 2015 Draft, from LSU, and his numbers on the field are far superior to most of the defensive ends that were selected prior to him in the draft.

Also, he was the 13th defensive end selected in the draft and his statistics far outweigh the rest of the players in front of him. He had a good year in 2017 but nothing like 2016. In 2017, Hunter collected 45 tackles and seven sacks, which from most standards are great stats. In 2016, he was a complete monster in the Viking defense posting 12.5 sacks and 34 tackles.

Hunter was approaching the final year of his contract and would become an unrestricted free agent at the end of this year. The Vikings were not going to risk losing the 23-year-old, explosive defensive end that recorded 12.5 sacks two years ago for them as a second-year player.

The plan in Minnesota has always been to retain their defensive unit. With Hunter signed for the future, the Vikings can now switch their attention back to linebacker Anthony Barr, who is approaching the final year of his contract. Barr has been in the league for one year longer than Hunter, being taken in the first round of the 2014 NFL Draft as the #9 selection by Minnesota.

Barr is a three-time NFL Pro Bowler and has remained healthy throughout his career, even with playing outside linebacker. He also played in all 16 games in both the 2016 and 2017 seasons, while playing in 14 games in 2015 and 12 in 2014. Barr has recorded 198 tacked in his four-year career at linebacker.

With having one of the top three defensive units in football, and signing the likes of Kirk Cousins to lead the offense, the Vikings could be positioning themselves for a legit run at the Super Bowl. Cousins is in Minnesota for at least the next three years at quarterback and let’s not forget about a fresh Dalvin Cook returning to the lineup in the backfield. Cook went down last year with a torn ACL and was the league’s leading rusher prior to the injury. If he can return to form this year, with the addition of Cousins leading the way under center, the Vikings offense can measure up with their defense and become the most well-rounded team in the NFL.

Join us on Telegram to get even more free tips!
« NFL Releases Dates For Training Camps
Terrell Owens Will Give HOF Speech At Alma Mater »
SportingPedia covers the latest news and predictions in the sports industry. Here you can also find extensive guides for betting on Soccer, NFL, NBA, NHL, Tennis, Horses as well as reviews of the most trusted betting sites.
NFL Betting Tips, Predictions and Odds 332