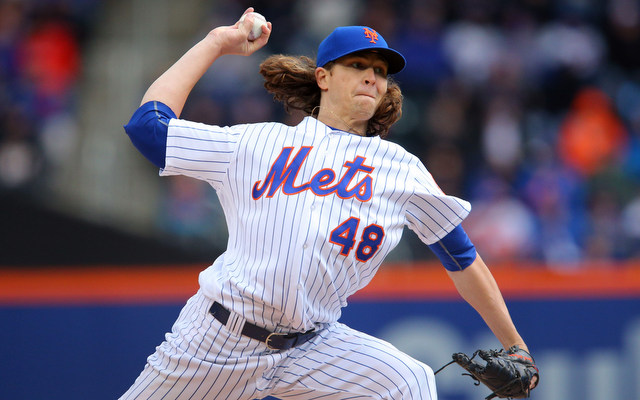 The New York Mets have had one of the top pitching staffs in baseball over the past few years but over the next month, that all could change. The Mets have held tight to Noah Syndergaard and Jacob deGrom but announced on Thursday that everyone on the active roster is available for trade, including both Mets pitchers.

Mets General Manager Sandy Alderson was forced to step away from his position for the immediate future to take care of some health issues as a result of cancer. Assistant General Manager John Ricco has stepped in to partially fill the shoes of Alderson and stated that the organization would be open for business before the trade deadline and that includes both Syndergaard and deGrom.

While Alderson is receiving treatment for his cancer, the Mets organization will operate with a three-party leadership crew of Ricco, JP Ricciardi and Omar Minaya, who will be making the decisions that will affect the Mets during and leading up to the trade deadline. Ricco stated in a recent interview that everyone is available in the organization, however, top-tier members of the rotation will need some extra added attention before he decides to part ways with them.

Syndergaard has only pitched in 11 games this year for the Mets. He is 4-1 and has a 3.06 ERA during 64.2 innings on the mound. Syndergaard has not pitched since May 25, where he ended up with a no-decision against the Milwaukee Brewers. He has since been on the disabled list and has begun his rehab assignment, most recently pitching 30 pitches in a bullpen session.

DeGrom is 30 years old, and even though it may not appear on paper, he has had a fantastic season this year. DeGrom is 5-3 overall, which doesn’t seem like very good numbers, but when you look at his overall statistics on the year, you see that he is still pitching very well, despite the Mets struggles. DeGrom has a 1.69 ERA in 16 games with the Mets, allowing just 75 hits and 19 earned runs in 101.1 innings. DeGrom has struck out 126 batters while walking just 27.

DeGrom has lost three of his last four starts but has only given up seven runs in the four games. The issue with deGrom’s low numbers is the fact that the Mets are providing no run support for the 2014 Rookie of the Year. DeGrom has been with the Mets since his MLB debut in 2014 and has a career record of 50-35 and a 2.81 career ERA.

DeGrom is under contract with the Mets for the 2018 season and is making $7.4 million dollars for the year. He has battled an elbow injury this year and spent a brief stint on the ten day DL from May 3 to May 13.

Both Syndergaard and deGrom are expected to attract a significant amount of teams showing interest. One of those teams that are going to be interested will be the Mets cross-town rivals, New York Yankees. The Yankees have been hit hard by injuries to the starting rotation this year and could use a pitcher like Syndergaard or deGrom.

Join us on Telegram to get even more free tips!
« Injury Bug Continues To Plague LA Angels
Astros Place SS Carlos Correa To 10 Day DL »
SportingPedia covers the latest news and predictions in the sports industry. Here you can also find extensive guides for betting on Soccer, NFL, NBA, NHL, Tennis, Horses as well as reviews of the most trusted betting sites.
MLB Betting Tips, Predictions and Odds 241