Twitter
« Kevin Durant To Opt Out Of Contract
BREAKING NEWS: LeBron James Opts Out Of Cleveland » 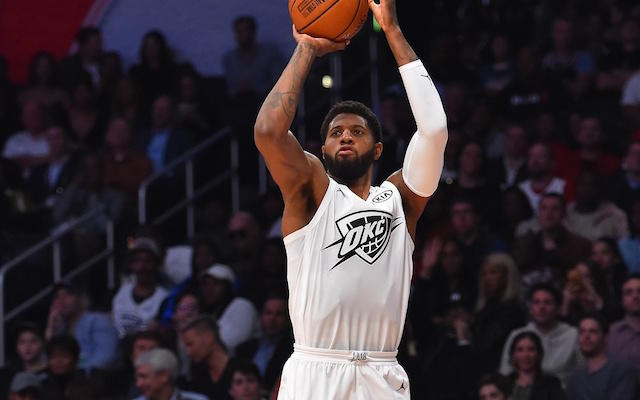 The Oklahoma City Thunder basketball team is very familiar with losing players in free agency, and it appears that this could be the case once again with Paul George. George, also known as PG13, will reportedly opt out of his player option for the 2018-2019 NBA Regular Season. ESPN’s Adrian Wojnarowski reported on Thursday evening that PG13 will turn down the $20.7 million dollar player option and enter the upcoming free agency market.

All though he will test free agency, it does not necessarily mean that he will be parting ways with the Oklahoma City Thunder. George has stated that he is very interested in returning to Oklahoma City to take care of unfinished business and would be open to returning, for the right price.

There are several teams that are also expected to join the Thunder in the PG13 free agency market. The Los Angeles Lakers have been rumored team for several months now, that have been interested in George. George grew up in Palmdale, California and would make sense that he would want to go back and play for his home team. The Lakers are eagerly awaiting the decision on LeBron James and are hoping that they can use other players, like PG13, to lure James to LA.

The Philadelphia 76’ers are another team that is interested in PG13. George would serve as a veteran leader in Philadelphia, that they lack currently. The Sixers are a young and talented team, but without the guidance of a veteran player, they may be a few years away from reaching their true potential. Adding George in the mix with Ben Simmons, Joel Embiid, and Markelle Fultz, would instantly make them a playoff caliber team, that could potentially contend for the top spot in the Eastern Conference.

Another team that has recently begun throwing around George’s name is the Houston Rockets. The Rockets were the top team throughout the regular season last year and adding PG13 with the reigning MVP James Harden and CP3, Chris Paul, would create a formidable trio that would once again put them in position to repeat as the #1 seed in the NBA Playoffs.

Wherever George ends up signing, he will most certainly sign a max contract. He is 28 years old and still has plenty of years left in his prime. George had a very good year in Oklahoma City this past year, posting an average of 21.9 points per game, 5.7 rebounds per game and 3.3 assists per game.

Last year while in Oklahoma City, George, Russell Westbrook, and Carmelo Anthony led the Thunder to the playoffs and were beaten in the first round by the Utah Jazz. Many thought that the trio would be dismantled after last year’s playoff run, but that may not be the case. Last week, Carmelo Anthony took his player option on the final year of his contract, worth $28 million dollars, to return to Oklahoma City. Westbrook is already signed to a contract that will keep him around until at least 2022-2023, and that would mean that the only one left would be George. Time will tell if George will resign or part ways with the Thunder.

Join us on Telegram to get even more free tips!
« Kevin Durant To Opt Out Of Contract
BREAKING NEWS: LeBron James Opts Out Of Cleveland »
SportingPedia covers the latest news and predictions in the sports industry. Here you can also find extensive guides for betting on Soccer, NFL, NBA, NHL, Tennis, Horses as well as reviews of the most trusted betting sites.
NBA Betting Tips, Predictions and Odds 1385