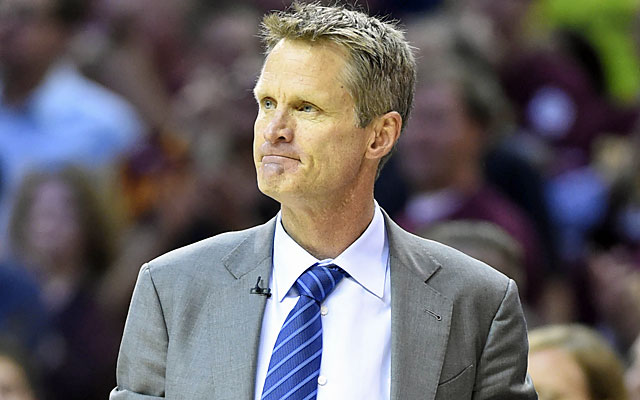 The NBA Champion Golden State Warriors and Head Coach Steve Kerr are in the process of finalizing a deal that will make him one of the highest paid coaches in the NBA. Kerr and the Warriors have won back to back NBA Finals Championships and three out of the last four overall. Kerr has taken the Warriors to the NBA Finals in each of the last four years and is building a legacy with the organization.

Kerr’s current contract was dramatically undervalued and not even in the top 5 of the highest paid coaches in the NBA. Kerr was in the fourth year of a $25 million dollar deal, and for a coach with the recent history that he has, he is very much deserving of a much larger payday. Kerr has proven to be one of the best head coaches in the league and now he will be compensated for being the best coach in the NBA.

Kerr has been a concern for missing time while being the Head Coach in Golden State. In October 2015, he had back surgery that sidelined him for several weeks. In 2017, Luke Walton controlled the team as Kerr had a spinal cord leak procedure that forced him to miss time, including parts of the playoffs. When Kerr left in October 2015, he didn’t return to the sidelines until January 2016, and by that time he returned, the team was 39-4. Kerr now appears to be healthy and working on back to back seasons without any health concerns.

Kerr is 52 years old and has only been the Head Coach of the Golden State Warriors. When he accepted the position with the Warriors, he turned down a position to coach the New York Knicks, in a much larger market but Kerr made the decision to take on the task of turning around a Golden State organization. Kerr was the GM of the Phoenix Suns prior to accepting the position with Golden State and was part of the group that would potentially purchase the Suns.

Kerr was named the 2016 NBA Coach of the Year and is a two time NBA All-Star Game Head Coach. He won the Rudy Tomjanovich Award in 2018 and will now be compensated appropriately for all his accolades. The Warriors have three championships in the past four years and are certain to retain many of the key pieces this offseason.

Kerr is 265-63 in his regular season coaching career and is 63-20 in the post-season. Kerr has had success with the Warriors as a head coach, as well as having five NBA Championships with the Chicago Bulls and San Antonio Spurs.

Kevin Durant is expected to enter free agency and then immediately sign again with the Golden State Warriors as one of the highest players in the league. With Durant on board, Steph Curry being locked up until 2022 and now the head coach signing an extension, this team could be destined for a legacy of greatness.

Join us on Telegram to get even more free tips!
« Lonzo Ball Has Torn Meniscus In Knee
DeAndre Jordan Opts Out Of Player Option  »
SportingPedia covers the latest news and predictions in the sports industry. Here you can also find extensive guides for betting on Soccer, NFL, NBA, NHL, Tennis, Horses as well as reviews of the most trusted betting sites.
NBA Betting Tips, Predictions and Odds 1385