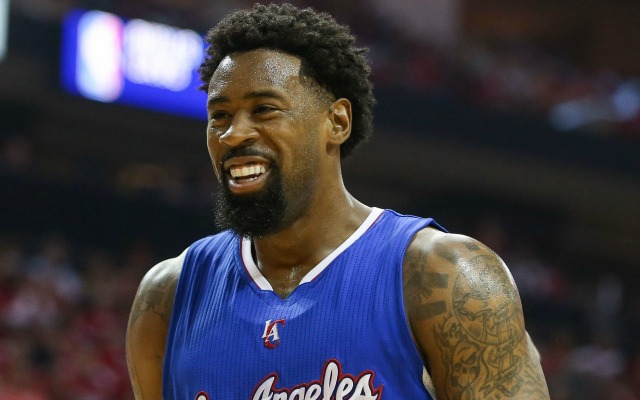 It comes as no shock to anyone to announce that former Los Angeles Clippers Center, DeAndre Jordan, has agreed to terms with the Dallas Mavericks and will sign a contract to play for the team for the 2018-2019 NBA Season. Jordan has played his entire NBA career with the Los Angeles Clippers organization and will now swap teams for the first time in his career.

Jordan will sign a one year contract to play for the Dallas Mavericks organization and Mavs owner Mark Cuban that is worth approximately $24.1 million dollars. This deal has been suspected for several weeks and most people close to the industry assumed that Jordan would sign with the Mavericks organization. Jordan cannot technically sign with the Mavericks until after the moratorium period ends on Friday, July 6, 2018.

As most will recall, this is the second time during DeAndre Jordan’s career that he has been thought to be headed to the Dallas Mavericks. Back in 2015, Jordan was a free agent and agreed in principle to a deal with the Mavericks but at the last minute, Jordan backed out of his verbal agreement and resigned with the Los Angeles Clippers for a four-year contract.

Jordan stated three years ago when he signed his contract to remain in Los Angeles, that he would like to stay in LA and play for the Clippers organization for his entire career. Somewhere along the way, things have changed and he will now head to Dallas and play for the Mavericks.

When Jordan backed out of his agreed deal with the Mavericks in 2015, he hurt the hearts of many Dallas fans but over time, the wounds have healed and now they will eagerly welcome Jordan to Dallas. Jordan spent ten years with the Clippers organization, getting drafted in 2009 out of Texas A&M.

Jordan is 29 years old and is a very efficient player, that has led the NBA in field goal percentage for five straight years. In addition to having a very strong field goal percentage, he has averaged 13.6 rebounds per game over the past five years. Jordan will provide the Mavericks with shot blocking capability and a physical rebounding presence that they have not had in many years.

The Mavericks picked up European Star athlete Luka Doncic in this year’s NBA Draft. With Doncic and Jordan as their offseason acquisitions, the Dallas organization is positioning themselves in a spot where they can at least contend with some of the average teams in the league, and planning for a better future.

Although the deal is just a one year contract, if the Dallas organization shows potential for improvement and appear as they are on the verge of going back to the land of competitive teams, Jordan may resign with the Mavericks at the conclusion of the season for a long-term deal. The team simply does not have much cap space to make any signings right now and will need to wait until at least 2019 before signing any long-term deals that will affect their salary cap.

Join us on Telegram to get even more free tips!
« Paul George Stays At Home With Oklahoma City Thunder
Chris Paul Signs Max Deal To Stay With Rockets »
SportingPedia covers the latest news and predictions in the sports industry. Here you can also find extensive guides for betting on Soccer, NFL, NBA, NHL, Tennis, Horses as well as reviews of the most trusted betting sites.
NBA Betting Tips, Predictions and Odds 1379