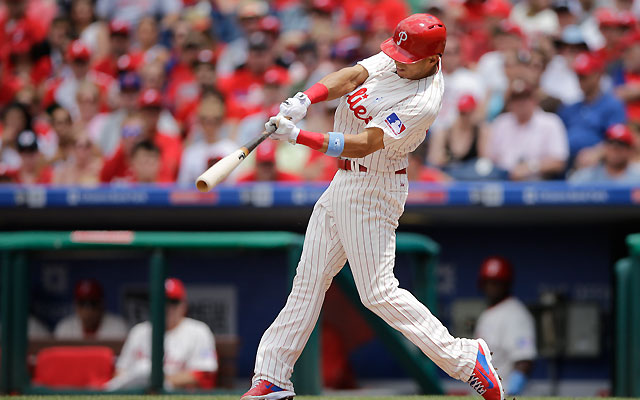 The season of injuries continues in the Major Leagues on Saturday, with Philadelphia Phillies Pitcher Vince Velasquez going down with an arm injury, after being hit with a line drive in the second inning of their game with the Washington Nationals. The Philadelphia Phillies are calling the injury a bad bruise but will monitor the situation throughout the night and on Sunday.

Washington Nationals’ Outfielder Adam Eaton was at the plate in the second inning and launched a line drive heater right back up the middle, which struck Velasquez directly in the forearm. Velasquez dropped his glove and then grabbed the ball with his left hand. Velasquez is a right-handed pitcher. However, he threw the ball to first base using his left hand.

Velasquez immediately went to the ground in severe pain grimacing and visibly suffering in extreme pain. Velasquez was grabbing and holding the arm, in the area of his forearm, and had to be treated by Phillies staff trainers. Velasquez left the game down by one run in the second inning, after giving up three hits and the one earned run. Velasquez struck out three batters and walked one in the game.

Velasquez is 5-8 on the season in 17 starts for the Philadelphia Phillies. Velasquez has a 4.69 ERA over 86.1 innings on the mound this year. He has given up 77 hits and 45 earned runs over the year. In the entire month of June, Velasquez only recorded one win over six starts. He went 1-3 in the six starts and gave up a below average 19 earned runs and 22 hits.

The Phillies are reporting that the injury is just a “contusion” which is another word for a bruise. They have not said whether or not there is any serious damage, such as a fracture. This injury should not cause Velasquez to miss any length of time, but that doesn’t mean he won’t miss a start or two. Things could have been a lot worse than what they initially appear, as a fracture would have put Velasquez down for several months, potentially ending his season. It is never good when an injury occurs to the pitchers throwing hand but even more concerning is when it was in the fashion of a line drive, estimated at over 100 mph, coming directly back at the player.

The Phillies came back in the game after Velasquez made his exit and pulled off a 3-2 win over the Nationals. Odubel Herrera hit a home run to tie the game in the 3rd inning. Odubel has hit 14 home runs on the year, with half of them, seven, coming in June. Odubel is hitting the ball well right now, hitting .286 on the season with 14 home runs and 45 RBI’s. The Phillies took the lead in the 4th inning off two doubles from Aaron Altherr and Jorge Alfaro.

The Phillies are right smack dab in the middle of a heated National League Playoff Race for the NL East Division Championship. They are currently three games back of the Atlanta Braves for the top spot in the division and have a one-game lead over their opponents, the Washington Nationals.

Join us on Telegram to get even more free tips!
« Cubs Use Heat And 20 Hits To Beat Twins
Cleveland Indians Lose Pitcher Danny Salazar for Remainder of Season »
SportingPedia covers the latest news and predictions in the sports industry. Here you can also find extensive guides for betting on Soccer, NFL, NBA, NHL, Tennis, Horses as well as reviews of the most trusted betting sites.
MLB Betting Tips, Predictions and Odds 241