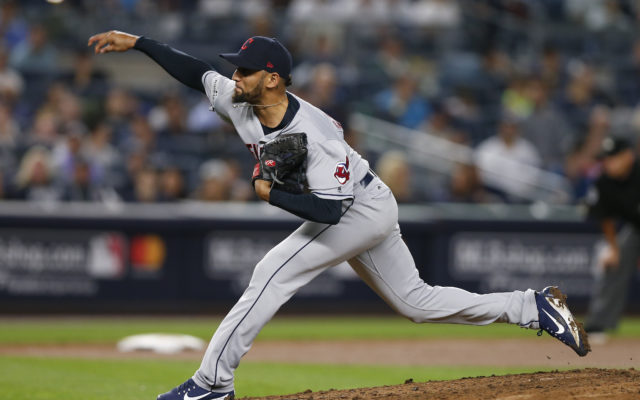 The Cleveland Indians announced on Monday afternoon that starting right-handed pitcher Danny Salazar will miss the entire 2018 season, as the results of arthroscopic surgery on his right shoulder. Salazar has missed the entire first half of the 2018 MLB Season, and with the recent surgery, he will miss the remainder of the season.

The surgery recovery is expected to take anywhere from 12-16 weeks before he will be able to throw a baseball again, then a long period of rehabilitation. The Indians have not released the severity of the injury, just stating that he had the surgery and would miss time.

Salazar has been one of the top arms in the league however he is constantly plagued by injuries. This is an on-going issue that has forced Salazar to miss time since his minor league days. He has always been an injury concern for the Cleveland Indians, and this surgery will hopefully put him back on the road to a healthy career.

Last year, the righty missed significant time from the mound. He was limited to just 103 innings over 19 games and finished the season with a 5-6 record. Salazar has 145 strikeouts and 44 walks. He ended the season with a 4.28 ERA. He has always been a starter for the Indians, but towards the end of the season, they were forced to move him to the bullpen to limit the innings on his arm.

Salazar went down again in August with pain and inflammation in the shoulder, which resulted in the Cleveland Indians ending his season. Salazar has not pitched in the majors since that period.

Salazar is a very hard-throwing pitcher who averages 10.5 strikeouts per nine innings. His hard-throwing ability may not be beneficial to his longevity in the league. He accepted a 5 million dollar, one year deal last season to avoid going into arbitration and because he will miss a full 12 months from the game, he will not be eligible for a raise, thus making the same amount of money in consecutive years.

Salazar came into the MLB in 2013, for the Cleveland Indians and had built up a career record of 38-33 with a 3.82 ERA. Salazar has struck out 686 batters in his career and was a 2016 All-Star Pitcher. He is just 28 years old, but with the nature of the injury and the lost time from the mound, the Cleveland Indians may opt to trade Salazar or simply not offer him a tender at the end of this year.

The Cleveland Indians are in first place in the American League Central Division. They have a 45-37 record overall and are currently nine games ahead of the Detroit Tigers for the top spot in the AL Central Division. The Indians have fared well without Salazar, posting a 3.93 ERA as a team, which ranks 6th in the American League among all pitching staffs.

Join us on Telegram to get even more free tips!
« Phillies' Vince Velasquez Goes Down With Arm Injury
Shohei Ohtani Goes From DL To DH »
SportingPedia covers the latest news and predictions in the sports industry. Here you can also find extensive guides for betting on Soccer, NFL, NBA, NHL, Tennis, Horses as well as reviews of the most trusted betting sites.
MLB Betting Tips, Predictions and Odds 241