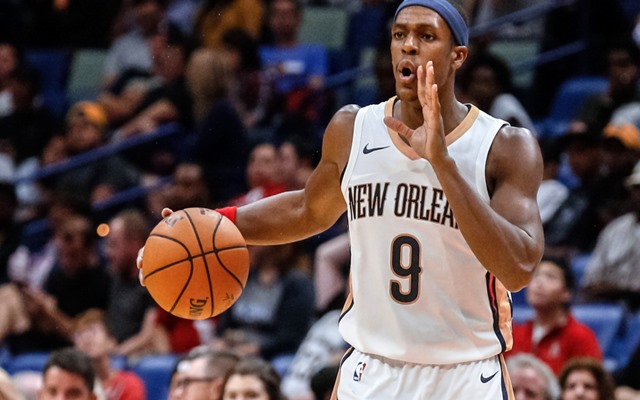 The ongoing NBA road trip for Rajon Rondo continued on Monday as he agreed to terms with the Los Angeles Lakers. Rondo will be joining LeBron James in Los Angeles, who agreed to a contract late last night. Rondo will play the Point Guard position for the Lakers, after signing a one year deal with the team. Rondo is expected to make somewhere in the area of 9 million dollars next season with the Lakers. Rondo has become accustomed to these short-term, one-year deals. He has played the past four seasons under these one-year contracts.

Rondo went to New Orleans last year and played alongside Anthony Davis. Rondo helped take the New Orleans Pelicans to the playoffs last year, advancing to the second round after defeating the #2 seed Portland Trail Blazers as the #6 seed in the Western Conference Playoffs. The Pelicans swept the Trail Blazers in four games to advance to the second round. The Pelicans ended up losing to the Golden State Warriors in five games.

Last year with the Pelicans, Rondo was used as a pass first, shoot second type of Point Guard. Rondo ended up averaging just 8.3 points per game, but he has 8.2 assists per game over 65 games in 2018. That may not seem like a lot for a veteran like Rondo, but those assists speak volumes as he played with Anthony Davis, who was the team’s top source of offense in 2018.

The floodgates opened up in Los Angeles over 24 hour span, with Kentavious Caldwell-Pope, Lance Stephenson and JaVale McGee all agreeing to play in Los Angeles alongside LeBron James, and now Rajon Rondo. The Lakers also made moves on their own to open up even more space with their cap capacity, renouncing their rights to Julius Randle and providing him the ability to become an unrestricted free agent.

With Randle becoming a free agent, many people suspect that the Lakers will now attempt to sign DeMarcus Cousins. Cousins has remained quiet during the last two week, and his name has not been mentioned as much as other players on the market. Cousins is recovering from an Achilles injury that forced him out of the lineup last year and limited him to just 48 games with the New Orleans Pelicans in 2018.

Join us on Telegram to get even more free tips!
« LeBron James Will Sign Contract With LA Lakers
"Boogie” Headed To Golden State Warriors »
SportingPedia covers the latest news and predictions in the sports industry. Here you can also find extensive guides for betting on Soccer, NFL, NBA, NHL, Tennis, Horses as well as reviews of the most trusted betting sites.
NBA Betting Tips, Predictions and Odds 1373