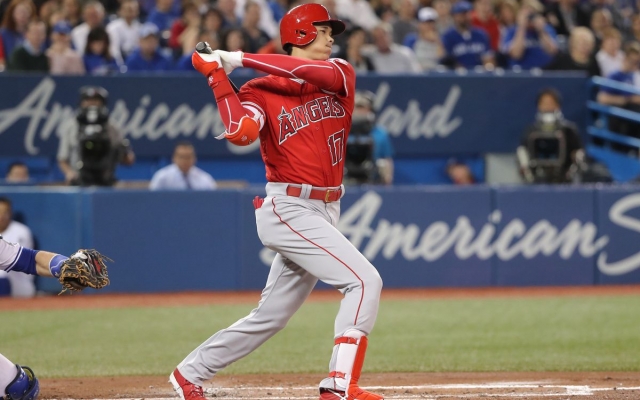 The Los Angeles Angels activated their two-way player, Shohei Ohtani, on Tuesday Night and will use him as their designated hitter. The Angels star has been on the disabled list for an elbow injury but is now back on the Angels active roster and was used in their lineup on Tuesday Night in the six hole.

Ohtani went on the DL on June 8, 2018, with a Grade 2 sprain of the ulnar collateral ligament in his right elbow. This type of injury usually requires surgery but the Angels and Ohtani chose to have a platelet-rich plasma and stem cell injections to hopefully prevent further injury and most importantly prevent surgery. Ohtani completed his rehab with team doctors and was cleared too to return to the active roster, however, he is only cleared to be a hitter in the lineup. Ohtani has not been released to throw a baseball and at this time, will not return to the pitcher’s mound.

The Angels really need Ohtani’s bat back in their lineup. Since he has been on the DL, the Angels have only gone 8-14 and are now sitting in fourth place in the American League West Division. The Angels are 11.5 games behind the Houston Astros for the top spot in the division. They have lost seven of their last ten games overall and are now just hitting .245 as a team, which puts them in the middle of the pack in 8th place in the American League. Ohtani is hitting .289 on the year with six home runs and with him being able to focus on hitting only, the Angels are hoping that he can boost their lineup with his offensive concentration.

Ohtani was cleared on Thursday to begin swinging the bat and participated in two simulated baseball games against minor league pitchers over this past weekend. Ohtani swung the bat well and had no issues with elbow pain or showed any signs of the potential of further damage. Ohtani was brought up on Tuesday will be monitored closely not to overwork his elbow.

Angels Manager Mike Scioscia stated that Ohtani will be checked on frequently but didn’t anticipate there being any issues from just swinging a bat. The main problem with this type of injury is the motion of throwing a ball, puts pressure on the ligament and causes pain.

There has been no talk on when, or even if, Ohtani will be able to return to the Angels pitching rotation. The Angels did get one piece of the starting rotation back on Tuesday as they got word that Garrett Richards has been cleared and should be taken off the DL on Wednesday to make the start against the Seattle Mariners.

Richards has not been confirmed for the start, however, the Mariners have confirmed that pitcher Tyler Skaggs will get the start on Thursday, and have left the open Wednesday start undecided. It is expected that they will activate Richards from the DL and he will be the pitcher to start on Wednesday afternoon against the Mariners.

Join us on Telegram to get even more free tips!
« Cleveland Indians Lose Pitcher Danny Salazar for Remainder of Season
Nationals Call Players Only Meeting After Boston Sweep »
SportingPedia covers the latest news and predictions in the sports industry. Here you can also find extensive guides for betting on Soccer, NFL, NBA, NHL, Tennis, Horses as well as reviews of the most trusted betting sites.
MLB Betting Tips, Predictions and Odds 241