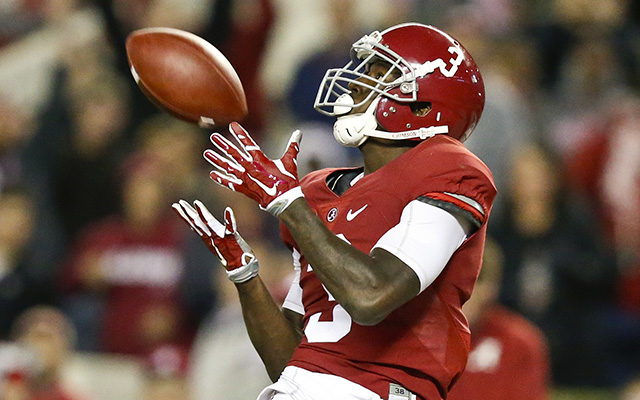 The Atlanta Falcons have agreed to a contract with their first-round draft pick, former Alabama Wide Receiver Calvin Ridley. Ridley and the Falcons agreed to a four-year deal worth $10.9 million dollars. The collective bargaining agreement currently in place basically sets the parameters for player and team, so the true negotiations are very limited.

Ridley is expected to line up opposite of All-Pro Wide Receiver Julio Jones, to form one of the most talented WR duos in the National Football League. He will serve as the premier route runner, catching passes from Matt Ryan. Jones and Ridley are both former Alabama Crimson Tide Wide Receivers that will play with Ryan. The quarterback will have a plethora of talent to pick from this year, as he will have Jones, Ridley and returning Wide Receiver Mohamed Sanu.

Ridley was a standout Wide Receiver for the Alabama Crimson Tide and Nick Saban. Over the course of his college career, Ridley brought in 224 receptions, 2781 receiving yards, and 19 touchdowns. Ridley has impressed teammates in the early camps and mini-camps, with players raving over how great he has been with running routes on the field.

Ridley was the 26th overall pick in last year’s NFL Draft by the Falcons. Most experts had him ranked as their top Wide Receiver coming out this year and expected him to be the 1st Wide Receiver taken off the board in the draft.

With Ridley signing his rookie contract, the Falcons have wrapped up their signing period, putting all of their 2018 NFL Draft picks on ink and under contract. The one contract that the Falcons have not wrapped up is their All-Pro, face of the franchise, Julio Jones, who is looking to rework his deal. Jones did not appear at any organized team events in May and wasn’t at the teams OTA’s. Jones completely skipped out on the June mandatory minicamp, which the Falcons were under the impression he would intend. The coaching staff had been confident that Jones would be at the minicamp but to their dismay, he was a no-show.

Jones feels that he is the top Wide Receiver in the league, however, there are now several wide receivers making much more annually than Jones. Players like Sammy Watkins, Jarvis Landry, and Allen Robinson have all recently inked contracts that surpass that of Jones however he is still regarded as the better option of all Wide Receivers in the league.