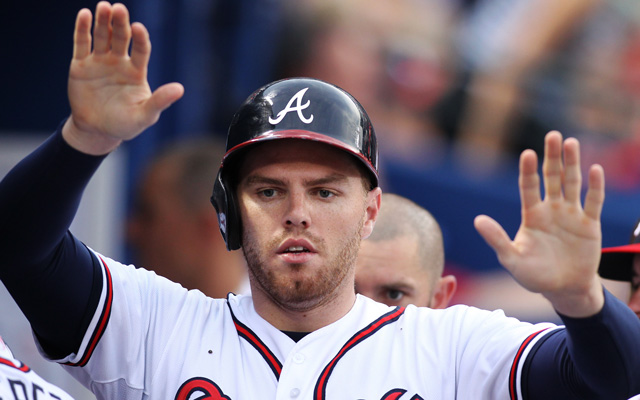 The Atlanta Braves are one of the hottest teams in the National League and are having one of their best seasons since 2013. The Braves are in first place in the National League East Division, with a 1.5 game lead over the Philadelphia Phillies. They have divisional title aspirations, with a very large part of their success hinging on the great play from First Baseman Freddie Freeman. Freeman is having a phenomenal season, leading the team in On Base % and Slugging Percentage. Freeman is batting .309 on the year with 16 home runs and 56 RBI’s.

On Wednesday, Freeman gave the entire Braves organization a scare, as he was hit by a pitch, while at the plate, in the right elbow by New York Yankees Pitcher CC Sabathia. Freeman was able to stay in the game initially and finish out the third inning but was pulled in the top of the fourth inning due to lingering pain and the inability to completely swing a bat. Freeman was visibly in pain and favoring the right arm while on first base. Danny Santana came into the game in the fourth inning to replace Freeman, who was diagnosed with a right arm contusion.

Braves reported that Freeman’s upper arm immediately began to get tight upon getting struck by Sabathia’s 91 mph sinker. Freeman attempted to stay in the game but trainers attempted to get him to hit off a tee, which he had a hard time extending the arm fully. Freeman said that he had no strength in the arm and he was dealing with some swelling in the upper portion of his arm. Freeman described the appearance as looking like a baseball on top of his triceps muscle.

Braves fans are well aware that Freeman has battled injuries over the past few years with injuries to both of his wrists. Last year, Freeman missed 44 games in the season with a fractured left wrist. Freeman fractured the wrist by getting hit by a pitch, similar to what happened on Wednesday. Freeman also missed time in 2015, with a right wrist injury, that forced him out of 42 games from the 2015 season. Freeman is currently the National League’s leading vote-getter for first basemen in the MLB All-Star Game.

Atlanta Braves Manager stated Wednesday Night that Freeman should be fine and is expected to be back in the lineup on Thursday. Freeman stated that he was very lucky that the pitch didn’t strike him in the hand and only struck his elbow. Freeman stated that he can handle a little bit of soreness and as long as he has strength in his arm tomorrow, he will deal with the pain and be back in the lineup. Freeman told reporters in the postgame interview that this same injury occurred a few years back in Houston, where he was hit in the elbow and was able to play the next day without any issues.

That being said, Freeman also said that he couldn’t lift his arm up and was going to continue to ice the injury throughout the evening, as well as use an electrical stimulation machine to attempt to get the swelling down and play on Thursday.

Join us on Telegram to get even more free tips!
« Angels Get Two Off And Send Two More To Disabled List
SF Giants Prepared For A Playoff Run »
SportingPedia covers the latest news and predictions in the sports industry. Here you can also find extensive guides for betting on Soccer, NFL, NBA, NHL, Tennis, Horses as well as reviews of the most trusted betting sites.
MLB Betting Tips, Predictions and Odds 241