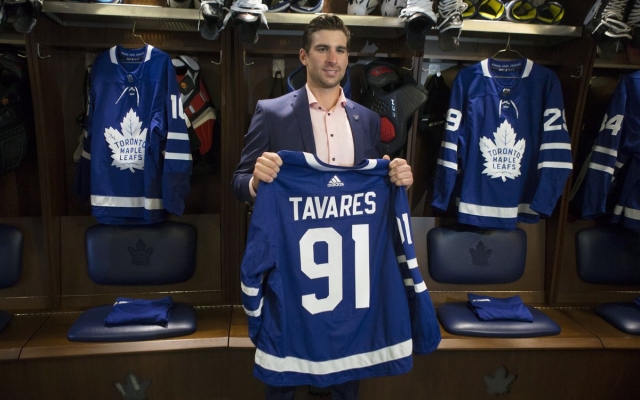 The National Hockey League will not start their regular season games for another couple months, but the action is out for the ice league.  Free Agency is always a fun time, no matter what league it is, and there is no exception for the NHL. Here are some of the top names that signed during the 2018 – 2019 Free Agency period:

John Tavares: The 27-year-old center went from the New York Islanders to the Toronto Maple Leafs. Oddsmakers instantly went to their sportsbook and changed the odds, and made the Toronto Maple Leafs the favorite to win the Stanley Cup. Tavares has recorded the sixth most points in the National Hockey League since 2004.  He is a massive impact player and will show dividends when the season gets started. Tavares signed a deal for 7 years and $77M. Oh – and if more good news was needed Tavares is a native of Toronto.

John Carlson: The Washington Capitals signed their top defensemen from a season ago, and the best on the market. Carlson is 28 years old and won his first Stanley Cup title this past season. He scored 15 goals and dished out 53 assists while taking just 32 penalty minutes. Washington lost their head coach but were not ready to lose their top defenseman inking him for 8 seasons and $64M.

James Van Riemsdyk: Toronto took a hit by losing the 29-year-old leftwinger to a 5 year, $35M contract with Philadelphia. The Flyers could use someone to rely on in the scoring department, and this could be their goal. A season ago, he finished with 36 goals and 18 assists. Philadelphia has tentative plans to use Van Riemsdyk on their third line, which would make them a very deep team.

Paul Statsny: The former St. Louis Blues center went to Winnipeg last season, and led the Jets to the Western Conference Finals. The center is now heading to the Vegas Golden Knights. This will be a great fit for him, and his 3-year contract worth just shy of $20M seems to be a steal. Statsny is 32 years old but finished with 53 points last season. He appears to be in line to replace James Neal, who went to Calgary.

James Neal: The 30-year-old left Vegas and went to Calgary. The deal for Neal is worth more than $28M and is for 5 seasons. Neal was a huge cog for the Golden Knights a season ago heading to the Stanley Cup Finals. Neal scored 25 goals and dished out 19 assists. He should be in a good spot in Calgary, a team that finished 27th in scoring.

David Perron: This is the third stint with the Blues for the 30 year old leftwinger. Perron went to Vegas for a season, and went to the Stanley Cup Finals. Now, the Blues are hoping to use his experience to lead them to the Stanley Cup. Perron signed a deal for 4 seasons, $16M.

John Moore: The 27-year-old defenseman is now a member of the Boston Bruins. This is a big loss for New Jersey, a team that struggled all of last season.

That’s a look at the top free agent signings early on in the process. There will be more to come, but these are the big names that have agreed to deal.

Join us on Telegram to get even more free tips!
« O'Reilly Sent to St. Louis to Spark Blues Offense
Numerous Top Players Still Available Via Free Agency »
SportingPedia covers the latest news and predictions in the sports industry. Here you can also find extensive guides for betting on Soccer, NFL, NBA, NHL, Tennis, Horses as well as reviews of the most trusted betting sites.
NHL Betting Tips, Predictions and Odds 800