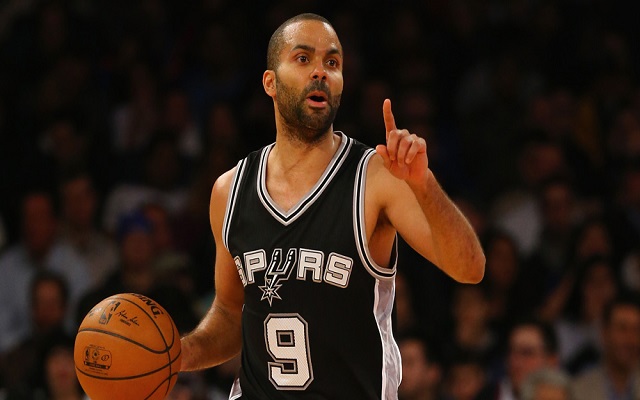 Tony Parker has played for the San Antonio Spurs for 17 years and is one of the longest-tenured players to remain with one organization in the NBA, however, that time is coming to an end as it was announced on Friday that Parker would sign with the Charlotte Hornets ending his time as a Spur. Parker has played his entire 17-year career in San Antonio, after being drafted by the Spurs with the 28th overall pick in the first round of the 2001 NBA Draft.

The San Antonio Spurs icon is scheduled to sign a contract worth $10 million dollars, spread out over two years. Parker was a six-time NBA All-Star and won the NBA Finals Championship on four occasions, in 2003, 2005, 2007 and 2014. Parker was the 2007 NBA Finals MVP and has countless accolades that he has gathered during his time in San Antonio.

Parker missed the first part of the 2017-2018 NBA Season with an upper quad injury. However, he returned and played the rest of the season, which ended up being 55 games, for the Spurs. Naturally, with being 36 years old, his playing style has changed and he is no longer a player to make moves towards the bigger bodies in the paint and attack the rim. Last season, he averaged a career low of 7.7 points per game and 3.5 assists per game.

The Spurs had interest in resigning Parker, as did the Denver Nuggets. However, Parker decided to head to the East Coast and play in Charlotte. Parker has a very good relationship with Charlotte Hornets head coach James Borrego, who was with the San Antonio Spurs up until May of this year when he left to take the vacant head coaching position in Charlotte.

Had Parker decided to remain in San Antonio, he knew to go in, that his role within the team would be changed to a backup point guard coming off the bench, behind young talent of Dejounte Murray. Currently, Parker will line up next to Kemba Walker, permitting he stays in Charlotte. Walker has been the recent talk of numerous trade rumors.

There is speculation now that because Parker is leaving the Spurs, which this could potentially open the door for Kawhi Leonard to remain with the organization. Leonard stated in a recent interview that Parker’s public comments were the last straw on the reason why he wanted out of San Antonio and the main culprit for his intentions to leave the Spurs. Parker had stated earlier in the season that his quad injury, was “100 Times Worse” than what Leonard had. Now that Parker has moved on, only time will tell if the Spurs can move on from the entire situation and rekindle the relationship with Kawhi Leonard.

Join us on Telegram to get even more free tips!
« Thunder and Carmelo Anthony Part Ways
Mavericks Owner Mark Cuban Thinks DeAndre Jordan Makes Them Instantly Competitive »
SportingPedia covers the latest news and predictions in the sports industry. Here you can also find extensive guides for betting on Soccer, NFL, NBA, NHL, Tennis, Horses as well as reviews of the most trusted betting sites.
NBA Betting Tips, Predictions and Odds 1371