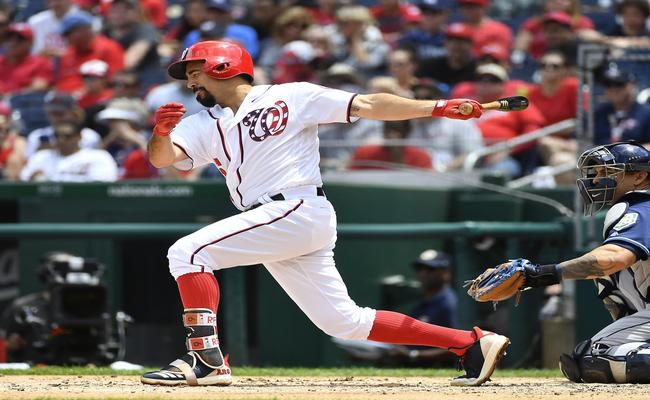 The Washington Nationals called a players-only meeting following Wednesday’s loss at the hands of the Boston Red Sox. They had been swept by the Red Sox and preparing for a home series against the Miami Marlins, but stupid mistakes had cost the team several games. The Nationals has lost eight of their last nine games overall and had a ton of questions surrounding this team.

The Nationals were sitting in third place in the National League East Division, but they have plenty of time remaining to close ground, before the MLB’s All-Star break. On Thursday, the Nationals found themselves down early in the game, and it appeared that once again, they would extend their five-game losing streak, after finding themselves down by nine runs in the bottom of the fourth inning.

But in the MLB, they play nine innings, and the Nationals found some spark in their bats. Trea Turner had a career night at the plate, hitting his first ever career grand slam and driving in eight runs on the night, off two home runs. Turner has tied the record for the most RBI’s from a leadoff hitter on Thursday Night with eight RBI’s. The Nationals came from behind after being down by nine runs and won the game against the Miami Marlins 14-12.

The young Miami Marlins rookie Pitcher Pablo Lopez gave up a solo shot to Turner in the fourth inning, which started the comeback. He then gave up four runs in the fifth inning, and the Nationals found some life in the team that had no pulse a few innings prior. The Nationals scored in the 4th,5th, 6th and 7th innings to put the Nationals on top.

The Nationals got Matt Adams back off the 10-day disabled list, and he came back with a bang! Adams went 4-for-5 on the night with three runs. Adams was taken off the DL yesterday, before the Red Sox game and had a nice comeback game against the Miami pitching staff.

The Nationals are now back at .500 with a 43-43 record. They are 6.5 games back of the Atlanta Braves, who have now lost back to back games. The Nationals have a fairly easy schedule to close out the first half of the year, playing three more games against the Miami Marlins, before heading off the Pittsburgh for a three-game set against the Pirates and then heading off to the Big Apple for a four-game series against the dreadful New York Mets.

Join us on Telegram to get even more free tips!
« SF Giants Prepared For A Playoff Run
Manny Machado’s Days In Baltimore Coming To An End »
SportingPedia covers the latest news and predictions in the sports industry. Here you can also find extensive guides for betting on Soccer, NFL, NBA, NHL, Tennis, Horses as well as reviews of the most trusted betting sites.
MLB Betting Tips, Predictions and Odds 241