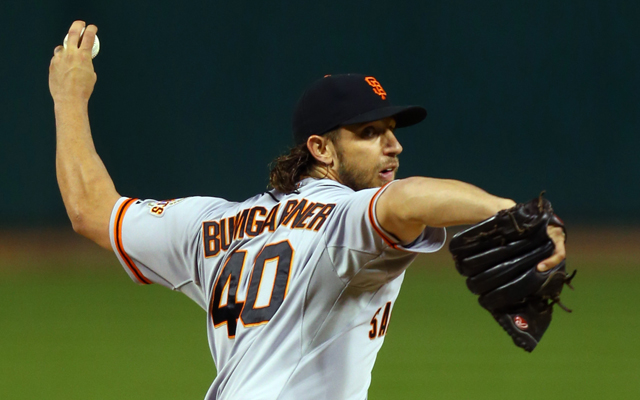 The San Francisco Giants are sitting in third place in the National League West Division and approaching the MLB All-Star break with a ton of excitement surrounding the team. The Giants are 45-43 on the season and just 3.5 games back of the division-leading Arizona Diamondbacks.

The Giants came into the regular season questioning their offense and whether they had the proper lineup to put runs on the board each night. The Giants were active in the offseason, picking up Andrew McCutchen and Evan Longoria prior to the start of the regular season. The offense has not been an issue this year, at least from a hitting standpoint.

The Giants are .253 as a team, which is 4th in the National League. They are anchored by Shortstop Brandon Crawford, who is hitting .310 on the year. Crawford also leads the team in RBI’s this year with 39. Brandon Belt also has a great year. He has hit 13 home runs and has served as a power source for this Giants lineup.

The Giants may have a better record had they not been dealing with various injuries along the roster. On Thursday Night, the Giants got a very important part of the team back in the lineup and off the disabled list, as the Giants activated Pitcher Johnny Cueto. Cueto has been on the DL since April 22 with a sprained right elbow.

Being a right-handed pitcher with an injury in the right elbow, the Giants had to use every precautionary measure when it came to his recovery period and make sure the San Francisco righty was completely healed up and ready for a return. Cueto started the season very impressive, running up a 3-0 record and a 0.84 ERA.

He has always been one of the more dominant pitchers in the majors and has always had impressive numbers. Cueto made two rehab starts in the minor leagues and was nearly perfect. In his last rehab start, Cueto went four innings without allowing a run at Triple-A Sacramento. Cueto struck out six batters and walked just one.

The Giants will be thrilled to have Cueto back in their rotation and will now wait to get their other right-handed pitcher on the disabled list, Jeff Samardzija. Samardzija has been on the disabled list for a shoulder injury but the Giants are expecting to activate him off the DL on Saturday, where he will make his 9th start of the year.

Samardzija has made four rehab starts and has looked really impressive. Samardzija went six innings and allowed just two earned runs at Triple A-Sacramento. Samardzija wasn’t having the best season when he went down with the injury. He was 1-4 on the season with a 6.56 ERA. The Shark will hope to return on Saturday and work his way back to a .500 record.

The next big event for someone returning off the DL for the Giants will be Evan Longoria. Longoria had left-hand surgery back on June 19 and he is expected to begin swinging a baseball bat in the next week. Longoria is not expected back with the Giants until next month, which is when they will be making their playoff run. This team is getting healthy finally and looking to make a push for the National League West Divisional Title.

Join us on Telegram to get even more free tips!
« Freddie Freeman Exits Game With Injury
Nationals Snap 5 Game Losing Streak Thursday Night »
SportingPedia covers the latest news and predictions in the sports industry. Here you can also find extensive guides for betting on Soccer, NFL, NBA, NHL, Tennis, Horses as well as reviews of the most trusted betting sites.
MLB Betting Tips, Predictions and Odds 241