Cleveland Brings Carrasco Off DL, And He Earns Win 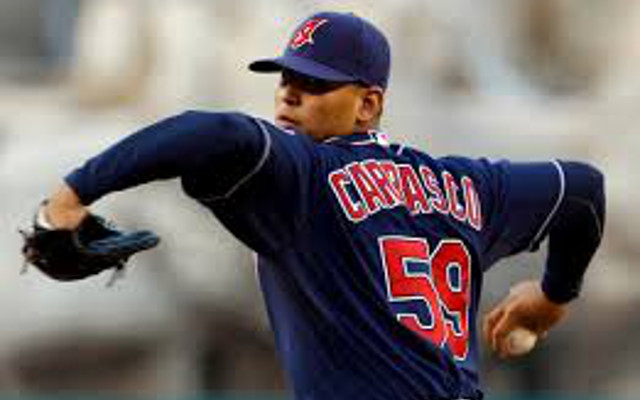 The Cleveland Indians activated Carlos Carrasco from the ten-day disabled list on Friday Night and gave him the immediate start, against the Oakland Athletics. Carrasco had been on the disabled list since June 17, when he was hit by a line drive back up the middle, off the bat of Joe Mauer of the Minnesota Twins, which struck him in the forearm.

The Indians got immediate X-rays of the forearm, and it showed no structural damage, but they used the cautious approach with Carrasco and left him on the disabled list, while he was dealing with the pain from a pretty bad bruise. The Indians let Carrasco make a rehab start for Double-A Akron, and he looked good, going four scoreless innings while striking out four hitters.

In his return on Friday Night, Carrasco and the Indians kicked off a ten-game homestand, which starts with the Oakland Athletics for three games, then welcome the Cincinnati Reds for three games, and then they will end the first half of the regular season against the New York Yankees for four games, just prior to the MLB All-Star break.

Carrasco went 5.1 innings on Friday Night, giving up two early home runs in the game that were complete bombs! Matt Olson and Dexter Fowler both launched powerful home runs completely out of the park, and Indians fans began wondering if Carrasco was fully recovered and able to lead the team to a victory. Dexter Fowler came to the plate as the first batter Carrasco faced in the majors since getting hit with the line drive, and Fowler took Carrasco out of the park with a 460+ feet home run on the fourth pitch thrown by Carrasco.

Matt Olson started out the fourth inning by doing the very same thing, taking Carrasco deep with a 430+ foot home run over the center field wall. Carrasco shook off the early home runs and came back strong, striking out seven batters in the game and showing absolutely no signs of any lingering effects from being hit with the line drive.

The Indians came back strong in the game, putting up ten hits and ten runs in the game, beating Oakland 10-4 and ending the Athletics recent winning streak, where they won eight out of their last ten games overall. The Indians and Athletics will run it back again on Saturday with Corey Kluber pitching for the Cleveland Indians and Edwin Jackson pitching for the Oakland Athletics. That game will be played on Saturday afternoon with a first pitch scheduled to take place at approximately 4:10 PM ET. It will be interesting to see how safe the Indians play it as they hold a massive lead in the American League Central.

Join us on Telegram to get even more free tips!
« Lifetime Ban Overturned In MLB
Houston Astros Bring In Top Prospect »
SportingPedia covers the latest news and predictions in the sports industry. Here you can also find extensive guides for betting on Soccer, NFL, NBA, NHL, Tennis, Horses as well as reviews of the most trusted betting sites.
MLB Betting Tips, Predictions and Odds 241