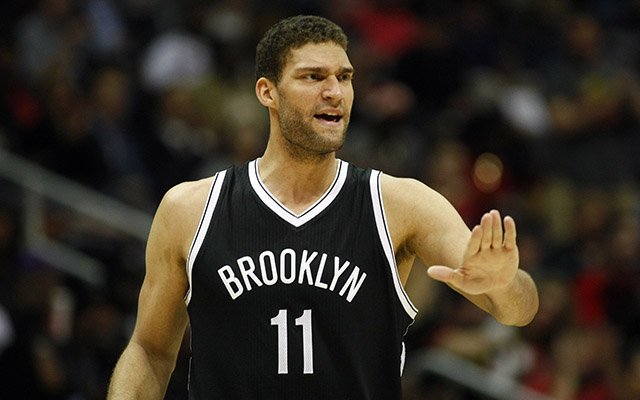 The Los Angeles Lakers are rumored to be trying to sign more players in free agency after inking potentially the best player in the NBA, LeBron James, to a max contract, but on Sunday, they lost one as Brook Lopez will be parting ways with the LA Lakers and headed to the Milwaukee Brewers.  This will be the second straight year that Lopez has switched teams after spending nine years with the New Jersey and Brooklyn Nets.

Lopez posted career-low numbers in Los Angeles last year, mainly in part due to his reduced role with the Lakers.  Lopez posted an average of 13 points per game, four rebounds per game and 1.3 blocks per game, which was his lowest averages across the board in his career.  Lopez played at a reduced amount of minutes last year, playing just 23.4 minutes per game, playing the backup role behind Julius Randal. Lopez has career numbers of 17.9 points per game, 6.8 rebounds per game and 1.7 blocks per year, over 31.2 minutes per game.

Lopez is one of the larger, more physical Centers in the league.  He is 7’00 tall and tipping the scales at nearly 270lbs. He is 30 years old and is a former NBA All-Star, that will now head to the Milwaukee Bucks to play side by side with the “Greek Freak” Giannis Antetokounmpo, Khris Middleton and up and coming center, John Henson. He will make an immediate scoring impact for the Bucks in the post, something that they have lacked for several years. Lopez should win the starting Center position over Henson, Thon Maker, and Tyler Zeller.

Lopez may be big, but his rebounding has been questioned at nearly every team he has played.  For a big man at over seven foot tall, a career average under 7 rebounds per game is very uncharacteristic for someone of his size.  That being said one thing that he has improved drastically is his shooting, especially from the three-point range. Last year and the previous year, Lopez has shot 34.5% from beyond the three-point range.

The Lakers have completely rebuilt their roster in the offseason adding the likes of the top free agent in the offseason LeBron James, Kentavious Caldwell-Pope, JaVale McGee, Lance Stephenson and Rajon Rondo.  The Lakers parted ways with their Center from last year Julius Randle, immediately following the LeBron James signing and of course now Lopez but they signed JaVale McGee from the Golden State Warriors, who is expected to be the starting Center in 2018-2019.

Join us on Telegram to get even more free tips!
« Three Team Trade Involving Four Players Made In NBA
Milwaukee Bucks get Big Man They Need »
SportingPedia covers the latest news and predictions in the sports industry. Here you can also find extensive guides for betting on Soccer, NFL, NBA, NHL, Tennis, Horses as well as reviews of the most trusted betting sites.
NBA Betting Tips, Predictions and Odds 1346