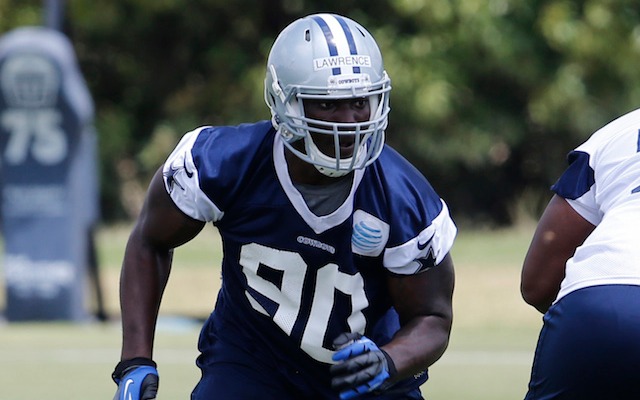 The franchise tag deadline is quickly approaching in the NFL and the pressure to wrap up long-term contracts is the desire of several players. There are less than ten days remaining until the July 16, 2018 deadline for players to agree on a multi-year agreement with their respective teams. One of those players attempting to lock up a long-term, multi-year deal is Dallas Cowboys Defensive End DeMarcus Lawrence.

Lawrence is requesting to get paid more money, which what will be compensated to Hunter. The Athletic’s Calvin Watkins reported that Lawrence would ideally like to wait for Khalil Mack, Aaron Donald, and Jadeveon Clowney to all sign an extension and surpass what Lawrence is expecting and more than what Hunter received with the Vikings.

The good thing for Cowboys fans is Lawrence is under the contract of the franchise tag, so if they do not agree to a long-term deal, it isn’t like he is going anywhere, at least not in the immediate future. He posted 14.5 sacks in 2017 but looking at it from the Dallas Cowboys point of view, that was the first time in his career that he posted double-digit numbers in sacks. The Cowboys would ideally like to see a trend in Lawrence instead of finding out after the fact that he was a one-hit wonder.

For Khalil Mack, he is the Defensive Player of the Year and was recently named the #2 Toughest Defender to stop in the NFL. Mack is still playing under the final year of his rookie contract, which will compensate him $13.85 million dollars in 2018. He is 27 years old and is the centerpiece for the Oakland Raiders defense.

The main concern for Mack is if he is injured during the season, he has nothing to fall back on for the future, so it is imperative that he signs a contract within the next week. He is an aggressive defender that has racked up 36.5 sacks and three Pro Bowl invites over the past three years.

For Aaron Donald, he is also in the final year of his rookie contract, that will pay him $6.89 million dollars in 2018 and was one of the most dominating forces on the LA Rams defense. and will now be paired up with Ndamukong Suh. They form potentially one of the scariest pass-rushing duos in the league.

Donald came into the league in 2014 as the first round draft selection with the Rams and has played his entire career right in Los Angeles. He is a four-time Pro-Bowler and last year’s AP NFL Defensive Player of the Year.

There really hasn’t been much talk about the process of Jadeveon Clowney and the Houston Texans. He was said to be close to signing a five-year contract extension that would be somewhere in the area of $18 million dollars, however, those negotiation talks have stalled since the end of May. Also, he is expected to make $12.3 million dollars this year for the Texans, which is more than the entire four year period previously made by the Texans defender.

Join us on Telegram to get even more free tips!
« Falcons Sign Rookie WR Calvin Ridley
AFC North: Division of Just Whatever in 2018 »
SportingPedia covers the latest news and predictions in the sports industry. Here you can also find extensive guides for betting on Soccer, NFL, NBA, NHL, Tennis, Horses as well as reviews of the most trusted betting sites.
NFL Betting Tips, Predictions and Odds 332