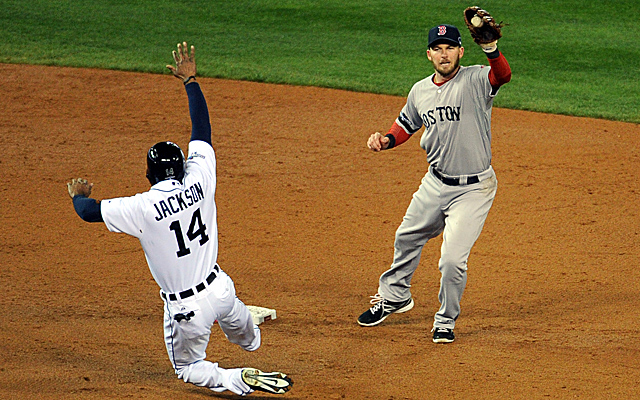 The Texas Rangers and San Francisco Giants have agreed to a Sunday trade in Major League Baseball. The Rangers have added to vets to their roster while the Giants have cleared out some unused salary. The Giants have sent Outfielder Austin Jackson and Right Handed Pitcher Cory Gearrin to the Texas Rangers in exchange for a player to be named later. The Rangers will also receive minor league pitching prospect Jason Bahr as part of the package deal.

The Giants had been looking for ways to cut some of the salaries on the year and add some youth to their lineup. They killed two birds with one stone in this trade. The Giants are attempting to get themselves under the $197 million dollar luxury tax line for their payroll and by parting ways with both veterans, it will help them get a bit closer to that goal.

The Giants will call up Ray Black and Steven Duggar to fill the roster spots left open by Jackson and Gearrin. Black will be used out of the bullpen for the Giants. The Giants pitching staff has a combined ERA of 4.06, which is 9th in the National League.

Duggar is looked at as the future of the Giants Outfield. Duggar is hitting .272/.354/.421 over the course of 78 games in Triple-A ball this season. Duggar made his MLB debut on Sunday, leading off for the Giants.

The Giants are in 4th place overall in the National League West Division, just 4.5 games back of the division-leading Arizona Diamondbacks. The Giants are trying to regain the momentum they had two weeks ago but have struggled most recently. They have lost five of their last six games overall and have gone from being down two games to now 4.5 games back in the division.

For the Rangers, they will receive Gearrin and Jackson in the deal. Gearrin is 1-1 this year in 35 games out of the bullpen for the Rangers. Gearrin has struck out 31 batters while walking just 13. He has allowed 33 hits on the season over 30 innings on the mound. Gearrin has been in the league since 2011 when he made his debut for the Atlanta Braves. Gearrin is 11-7 in his career with a 3.57 ERA. The Rangers will be just the third team Gearrin has played for in his career, after spending time with both the Braves and the Giants.

Jackson has hit .242 on the year with 13 RBI’s. He has appeared in 59 games for the Giants. Jackson is 31 years old and has been in the MLB since 2010 when he made his MLB debut for the Detroit Tigers. Jackson has played for numerous teams in the majors including the Tigers, Seattle Mariners, Chicago Cubs, Chicago White Sox, Cleveland Indians and San Francisco Giants.

The Rangers also will receive Barh, who is a young up and coming prospect. He is 23 years old and was 8-4 this year with a 2.55 ERA in 16 starts in the Carolina League for Class A.

Join us on Telegram to get even more free tips!
« Nationals Score 35 Runs And Undefeated Since Players Only Meeting
MLB All »
SportingPedia covers the latest news and predictions in the sports industry. Here you can also find extensive guides for betting on Soccer, NFL, NBA, NHL, Tennis, Horses as well as reviews of the most trusted betting sites.
MLB Betting Tips, Predictions and Odds 241