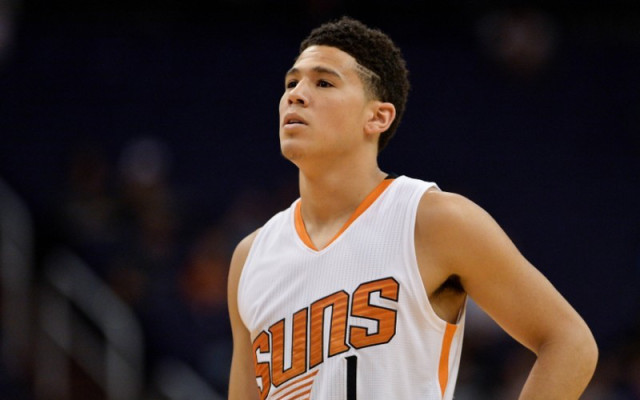 The Phoenix Suns have agreed to a max contract extension with Shooting Guard Devin Booker.  Both Booker and the Suns were looking to wrap up the extension and on Saturday Night, they finalized the terms of the agreement.  Booker broke the news on his Twitter page, posting a photo of himself signing his contract and making the deal official. Booker is a fan favorite in Phoenix and the signing will now make certain that he remains with the team and in the community for at least the next few years.

The details are said to be the largest contract handed down to a Phoenix Sun in the history of the franchise.  Booker has agreed with the Suns to a five-year max contract worth $158 million dollars. Booker was in the fourth year of his rookie contract and he was expected to make $3.3 million dollars however the former Kentucky Wildcat is now in for a major raise.  Booker’s contract will serve as 25% of the Phoenix Suns salary cap.

Booker has been in the league since 2015 when he was selected as the 13th overall selection in the first round of the 2015 NBA Draft.  Booker was selected by the Phoenix Suns and has remained with the team since that time. Booker was the NBA Three-Point Contest Champion at last year’s NBA All-Star Weekend.

Last year, Booker posted 24.9 points per game, 4.7 assists per game and 4.5 rebounds per game.  Considering that was over just 54 games and due to the fact that he played on the Suns, who were the worst team in the NBA last year with a 21-61 record.  The Suns have not won more than 24 games in all three years that Booker has been with the team but they are optimistic that he is the player to get them over the hump and back on track to a winning record.

Booker has a three year average in the NBA of 19.8 points per game, 3.5 assists per game and 3.3 rebounds per game.  He has played 208 games over the three year period of time. Booker is one of only six players in the NBA’s history that have scored 70 or more points. On March 24, 2017, Booker posted 70 points in the Suns game against the Boston Celtics.

Booker is still very young, just 21 years old, and most believe that he hasn’t even come into his peak prime yet.  Booker has 4,120 career points, which only two other players have scored 4,000 + points at the same age. Those two players are LeBron James and Kevin Durant.  Not bad company for the young Sun!

Booker will welcome the Suns 2018 NBA First Round, First overall selection Deandre Ayton to Phoenix.  Phoenix is a young team with a plethora of talent that they are building around for the future. With Booker and Ayton serving as the centerpieces for the Suns, they will now turn their attention to finding a veteran leader to sign from the remaining list of players available in the free agent market.

Join us on Telegram to get even more free tips!
« Mavericks Owner Mark Cuban Thinks DeAndre Jordan Makes Them Instantly Competitive
Three Team Trade Involving Four Players Made In NBA »
SportingPedia covers the latest news and predictions in the sports industry. Here you can also find extensive guides for betting on Soccer, NFL, NBA, NHL, Tennis, Horses as well as reviews of the most trusted betting sites.
NBA Betting Tips, Predictions and Odds 1371